Russia Threatens Deployment of SS-26 Rockets against US Missile Shield 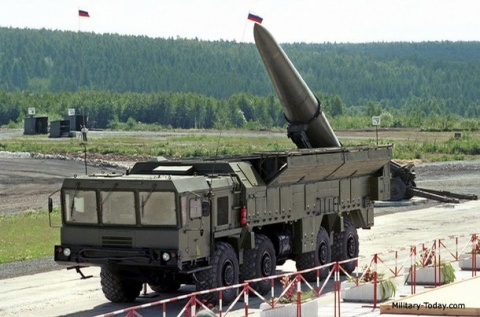 Russia is threatening to deploy SS-26 missiles to balance the US / NATO missile shield. Photo from military-today.com

Russia is likely to deploy short-range Iskander missiles in Europe if it does not reach an agreement with NATO about the US / NATO missile defense system in Europe, according to a senior Russia military official.

NATO has moved to establish a missile shield in Europe, which was formerly a US project of the Bush Administration, by stationing interceptor missiles at the Deveselu Air Base in Romania, near Bulgaria's border, and a radar in Turkey.

In spite of the various statements on both sides that Russia could eventually participate in the European missile defense system of NATO, the Russians remain out and opposed to the missile shield for the time being.

As a countermeasure, Russia could go ahead with wider deployment of Iskander missiles (NATO reporting name SS-26 Stone), which have a range of 400 km, according to a Russian military official cited Monday by Interfax.

"Until now Russia intended to deploy these rockets only in the Kaliningrad District. We are now considering the opportunities to place them in Belarus and the Krasnodar District (Southern Russia) as well. This will allow Russia to gain parity in case elements from the American missile defense are situated near our borders," the officials said, as quoted by Interfax.

Russia's response to the deployment of a U.S. missile defense system in Europe will be "reasonable and adequate," but will not end the possibility of further negotiations, Russian President Dmitry Medvedev said on Monday during a meeting with officers of the Southern Military District.

"We will have to make some decisions, and I will announce them soon. There is no doubt that our actions are reasonable, adequate and not closing the road in order to continue the discussion of the situation surrounding the European missile defense system with our partners in the North Atlantic [Treaty Organization]," Medvedev said, as cited by RIA Novosti.

He noted that the missile defense system and the way it is offered by the American side "can significantly change the system of parity," which may create certain problems for Russia.

The Kremlin says the US expansion of an anti-missile system in Europe is a potential threat to Russia's nuclear arsenal, while Washington has been trying to convince Moscow that the system poses no threat to Russia and is needed to protect against missiles that could be fired from countries with smaller arsenals such as Iran.

The missile shield dispute between Russia and the United States has undermined efforts to build on improvements in relations between the former Cold War foes and is intensified by Russia's uncertainty of U.S. policy after the November 2012 presidential elections.