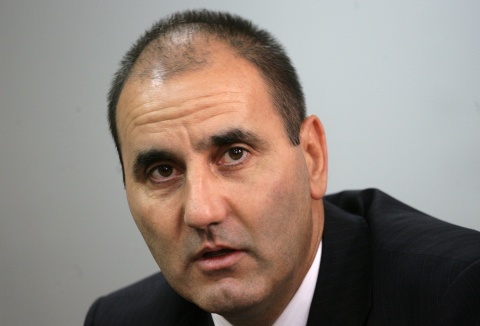 Bulgaria's Interior Minister Tsvetan Tsvetanov has denied allegations of a human rights NGO that he is undermining the independence of legal practitioners in the country. Photo by BGNES

Bulgarian Interior Minister Tsvetan Tsvetanov has termed the latest calls for his resignation as an exercise of free speech.

"I stand by my words about the state being stronger than the criminal world," he stated, adding that the request of the Bulgarian Helsinki Committee (BHC) was an expression of an inalienable democratic right of a non-governmental organization."

On Monday, the human rights NGO demanded that the Interior Minister leave office over his proposal that the Supreme Judicial Council (VSS) should have control over lawyers who deliberately protract proceedings to benefit their clients.

"Everybody has the right to speak freely without being disturbed, which includes issuing calls for resignations," he remarked.

To prove his point, Tsvetanov explained that several high-profile cases had reached court phase thanks to two years of efforts of the police and the prosecution, while the lawyers and the defendants were using all all the tools available to win postponements, as was the case with the "The Killers" trial in Shumen.

"The Killers" gang is believed to be behind several assassinations around the country, including the murder of controversial football club president Yuriy Galev, businessman Rumen Rachev, lawyer Petar Lupov and top banker Emil Kyulev.

"While it is true that all defandants have the right to defend themselves, it is also true that all victims of crime have a no less important right to receive defense, which means a timely conclusion of the penal proceedings with a verdict," Tsvetanov reasoned.

"I am not interfering with the court's inner conviction, but I would like to call on the lawyers working on the case to refrain from obstructing the trial process. I am not asking for anything more," he explained.

He further advised VSS against staying isolated from society's interests.

"The citizens and the civil society are anticipating the much-desired justice through the judiciary. At the same time, VSS is the governing body which can act as a guarantor of citizens' interests through its staff and disciplinary policy," Tsvetanov concluded.