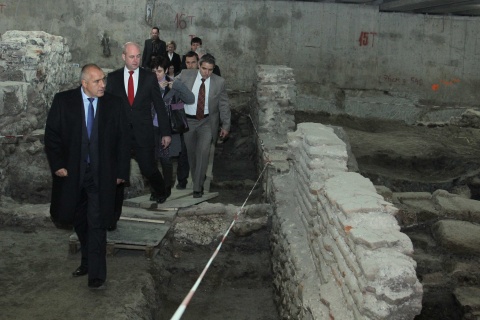 Bulgarian Prime Minister Boyko Borisov has scolded the heavily indebted states in the EU that have contributed to the euro zone debt crisis during a joint press conference with his Swedish counterpart Fredrik Reinfeldt.

Borisov is known for stressing Bulgaria's fiscal discipline in the hands of Finance Minister Simeon Djankov as Bulgaria has the second smallest public debt in the EU after Estonia – a fact noted positively by Sweden's Prime Minister Fredrik Reinfeldt.

"For everybody who did affford themselves the luxury of raising their debt, to pretend to be the good uncle or aunt, we all now need to come together in order to help them. The member states which obey fiscal discipline are right to demand that decisions be made by those who are responsible [spenders]," declared Borisov in Sofia Monday at his news conference with Reinfeldt.

"Otherwise, everybody would come right over, and say, "Give us some of your money now because for years we've been spending more than our nation could make; but at the same time, we also want to take part in the making of decisions. Decisions about what? Did you ask us when you were spending more money than you were making? No, you didn't! Those who want to take responsible decisions in Brussels, should first demonstrate their fiscal discipline in order to assure the others that they have a responsible attitude towards the EU and the euro," elaborated the Bulgarian PM.

During his remarks at his news conference with Borisov in Sofia, Sweden's Prime Minister Fredrik Reinfeldt praised Bulgaria for its fiscal stability and investment policies.