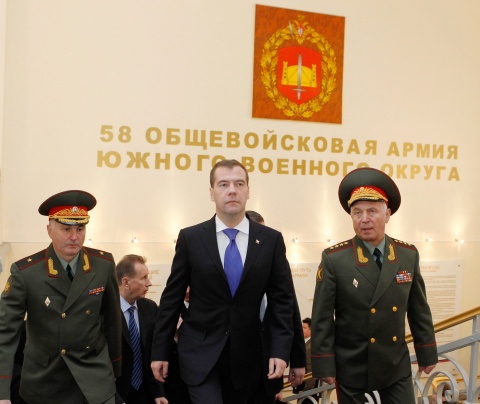 Russian President Dmitry Medvedev (C) flanked by Chief of the General Staff, General of the Army Nikolai Makarov (R), walks in the headquarters of the 58th Army prior to his meeting with officers of the Southern Military District in Vladikavkaz, Northern

Russia terminated the "eastward expansion of NATO" by going to war with Georgia in August 2008, according to Russian President Dmitry Medvedev.

"If we had wavered in 2008, the geopolitical layout would have been different; a range of countries which the North Atlantic [Treaty Organization] tries to artificially "protect" would have been within it," Medvedev said at a meeting with military officers in Vladikavkaz in Southern Russia, as cited by RIA Novosti.

The former Georgian republics of South Ossetia and Abkhazia formally broke away from Georgia in the wake of the 2008 Russia-Georgia War, after initially attempting to secede in the 1990s.

Georgian forces tried to bring South Ossetia back under central control in August 2008, but were repulsed by the Russian military.

After pro-Western Mikheil Saakashvili came to power in Georgia in 2004, the South Caucasus state has actively been pushing for entry into NATO to which Russia fiercely opposes.

After the brief military conflict between Moscow and Tbilisi in 2008, NATO shelved the idea of bringing Georgia into the alliance, stresses the Russian news agency.

It is believed that precisely at the Bucharest Summit of NATO, which took place in the spring of 2004, months before the Russian-Georgian War, the USA bowed to the pressure of some of its key European NATO allies such as Germany and France against the accession of Georgia and Ukraine to the Pact, as the Western Europeans were fearful that such a move could anger Russia.

"Time passes quickly, more than three years have passed, but the most important is that our stance on the events of this period has not changed," Medvedev said Monday.

He described Russia's actions in the 2008 conflict as "indispensable for the salvation of human lives," referring to Moscow's official stance that Russian troops saved South Ossetians from genocide by Georgia.

NATO and Russia froze relations for nearly a year after the Georgian conflict.

Russia and the alliance now have "turned back on direct rivalry," the Russian president added.

"However we should acknowledge that we have different stances on how a range of defense issues should be settled."

NATO's presence in the proximity to Russian borders concerns the country's leadership and "creates certain nuisances to us," Medvedev said.

Two weeks ago, however, during a visit in Tbilisi, NATO Secretary-General Anders Fogh Rasmussen declared that Georgia was coming closer to gaining a membership in the Alliance.