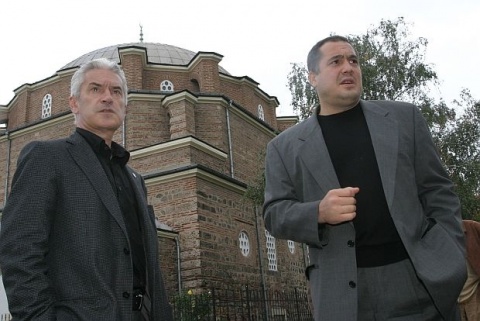 When a party leader ends up with a crashing election defeat, not only he should be asked to resign, he should make such decision on his own, the Bulgarian independent Member of the European Parliament, Slavi Binev, says.

Speaking in an interview for Darik radio Monday, Binev commented on the scandal between the leader of the far-right, nationalist Ataka party, Volen Siderov, and his stepson, Ataka MEP, Dimitar Stoyanov.

Binev, who was elected MEP on Ataka's ballot, but is not a member of the party, says the issues in the dispute are based on principles, despite the personal element – they must be resolved and the leader must assume responsibility both for achievements and mistakes, he added.

Two days ago, Ataka expelled its MEP, Dimitar Stoyanov from the party, after reports that Stoyanov has requested the resignation of party leader, Volen Siderov.

What is intriguing in the case is that the 28-year-old Stoyanov is a stepson to Siderov, and a natural son to his wife Kapka Siderova. The Siderov couple split recently, and, allegedly, Ataka's leader now lives with Ataka MP, Denitsa Gadzheva, who is much younger than Kapka. Gadzheva went to the same high school as Stoyanov, and numerous reports also link the two romantically in the past.

When asked if Stoyanov must now leave the EP since he is no longer a member of the nationalist party, Binev was adamant the young MEP should keep his post.

"He is a gem for Bulgaria – a man with a position, which he knows how to defend. People like him must be kept and used, not eliminated over emotions. As a side-lines observer and not being a party member, I believe Dimitar Stoyanov is posing honest and righteous questions, even though the party leadership might not like them," the independent MEP commented.

Binev further hinted that Siderov's defeat in the October elections, where he ran for president, could be due to his previous support for Prime Minister, Boyko Borisov, and the ruling, center-right Citizens for European Development of Bulgaria party (GERB). He labeled Borisov the "weakest, but most pompous Bulgarian ruler" so far.

"This was maybe the suffocating hug of Boyko Borisov. Everyone who played his game ended in shambles. When a leader leads his followers in the wrong direction, it is only normal that they will eventually lose trust in him," the MEP pointed out.

Volen Siderov claims the whole story is a plot between Prime Minister, Boyko Borisov, and Dimitar Stoyanov to deal a blow and eliminate Ataka, something Binev entirely dismisses, saying it was highly unlikely since GERB received so much support from Siderov.

"I am amazed how someone, who is smart, can be so easily misled and manipulated. The problem is not GERB. The truth is that we have a bad rule, but Ataka falling apart is not GERB's fault. GERB's fault is that it is ruling Bulgaria and Bulgaria is falling apart," the MEP said.

Binev added that it was time for Siderov to realize that patriotic idea is not a monopoly sealed by a notary deed, and stressed he will have a face-to-face talk with the party leader.

"In any case, he has to answer some questions for himself. So many people left him – it is impossible that they are all nasty guys and traitors," he concluded

Last Wednesday, Tsveta Georgieva announced she is becoming the next MP to leave the Ataka parliamentary group. Media reported later that Georgieva and Siderova are sisters.