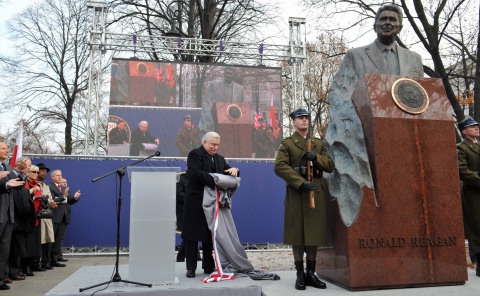 A monument of late US President Ronald Reagan has been unveiled in the Polish capital of Warsaw in recognition of Reagan's support for the Polish anti-communist movement.

"I wonder if modern Poland, Europe and the world could look like this without president Reagan," Walesa said, as cited by DPA.

"Let's bow to ... Mr. Reagan who in our generation we managed to end many divisions and many conflicts," he added.

Reagan had been a staunch supporter of Solidarity under the leadership of Walesa and efforts to overthrow communism.

Reagan's three-meter statue in Warsaw shows the former US President behind a podium to mirror the moment of his 1987 speech at the Brandenburg Gate in Berlin, next to the Berlin Wall, in which he challenged the Soviet Union leader, saying, "Mr Gorbachev, tear down this wall!'