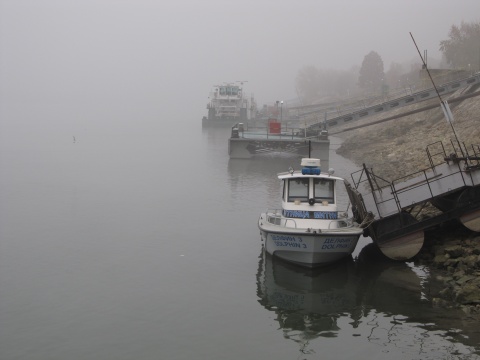 The Danube has registered its lowest level since 1941 in its Bulgarian section. Photo by BGNES

The current level of the Danube along the Bulgarian bank is the lowest since 1941, the Agency said Monday, as cited by BGNES.

The Bulgarian section between the ports of Somovit and Silistra has a total of 14 spots where the Danube level is below the river navigation minimum of 250 cm, and 6 spots were the waters are as shallow as 160 cm.

"This means that a ship with a draught of 160 cm can actually navigate through the respective spot but it is unfeasible for the ship owners to load their vessels because the freight volume would be too small, and would not justify their costs; they will hardly be able to break even," expalined Rosen Raykov, head of a Directorate at the Bulgarian Executive Agency for Exploration and Maintenance of the Danube River

The Agency is seeking alternative navigation routes along the Bulgarian and Romanian section of the Danube, and has already found one between kilometers 473 and 476.

The Bulgarian Executive Agency for Exploration and Maintenance of the Danube River based in Ruse has announced it is sending one of its exploration vessels – The Vit – to measure the river level at various spots along the Ruse-Svishtov section to research the river navigation possibilities.

Because of the low water levels of the Danube, the Agency expects that the mighty European river will freeze in the winter.

The last time the Danube froze in the Bulgarian-Romanian section of the river was in 1984-1985.