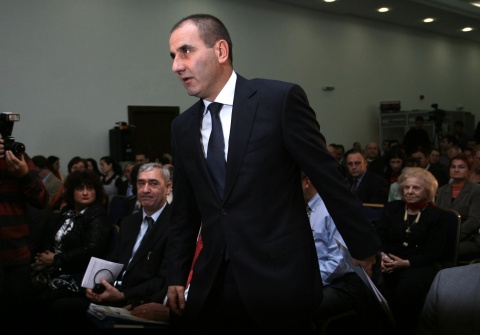 The Bulgarian Helsinki Committee (BHC) has issed a second call for the Interior Minister's resignation, citing his unwarranted comments about legal practitioners in the country. Photo by BGNES

The Bulgarian Helsinki Committee (BHC) has condemned Interior Minster Tsvetanov's recent claims that attorneys-at-law in the country should come under the supervision of the Supreme Judicial Council (VSS) so that unreasonable delays in court trials can be eliminated.

"Under Article 134 of the Bulgarian Constitution, the Bar in Bulgaria is free, independent, and autonomous. The right of citizens to an indepent defense by an attorney is a fundamental human right which is guaranteed by the Constitution and by international law," the NGO's Monday statement reads.

On Sunday, Interior Minister Tsvetan Tsvetanov claimed that VSS should exercise control over the activities of lawyers who deliberately protract proceedings to extract benefits for their clients.

"Observe lawyers' behavior. This is the right time for VSS to step in," he suggested said after complaining of the fact that the media and society were constantly criticizing the work of the court, the prosecution and the police while neglecting the actions of legal practitioners.

According to BHC, Tsvetanov must resign over his statement.

"This is not the first time that BHC advises Minister Tsvetanov to step down. The last time this happened was when he threatened Bulgaria's independent Bulgarian judiciary with repression in a similar expression of ignorant rudeness. It appears, however, that Bulgaria is no longer a country which adheres to the rule of law and this minister remains convinced of his impunity until further notice," BHC argues.

On July 04, Tsvetanov vowed to start naming special police operations after magistrates who let criminals out on bail for no good reason.

His statement came on the heels of a special police operation codenamed "The Protected", which was carried out to intercept a bank robbery attempt in downtown Sofia and resulted in the arrest of 10 high-profile bank robbers sporting nicknames such as "the Briefcase", "the Bloodhound", "the Brain", "the Thief", "the Crooked", etc.

"The threats issued by Tsvetanov against judges with regard to their future rulings on concrete cases, namely to use their names as stigmata, are an act of primitive violence against the judiciary, whose independence is instrumental to the existence of the state", BHC said on July 04, warning that it would seek the instant intervention of EU Justice Commissioner Viviane Redding on the matter.

In its latest statement, BHC claims that "Tsvetanov has yet again demonstrated that he is totally ignorant of basic constitutional principles".