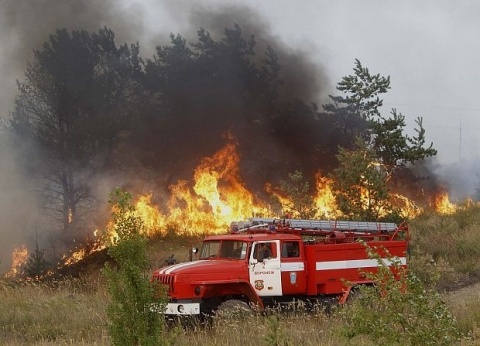 The rare winter wildfire in Bulgaria's Pirin Mountain, which raged over the weekend, was extinguished entirely by hand over the terrain being inaccessible for fire trucks. File photo by Sofia Photo Agency

Firefighters and civil defense teams have managed to extinguish the weekend wildfire in Bulgaria's Pirin Mountain.

About 120 firefighters, civil defense workers, employees from the Pirin National Park, mountain rescuers, and volunteers have localized the blaze late Sunday evening. They were able to do so by cleaning vegetation in the area and digging a ditch to prevent the further spreading of the fire. The extinguishing was done entirely by hand over the terrain being inaccessible for fire trucks.

The cause of the fire remains unclear.

The forest fire erupted Saturday afternoon in the Pirin Mountain in Southern Bulgaria, above the Demyanitsa mountain cabin, south of the country's most popular winter resort Bansko.

The fire was above the treeline, near the peaks of Kaymakchal and Strazhite, where an area of some 25 acres of grasses and mountain pine shrubs were destroyed.

The area, at 2,300 m altitude, can be accessed only by foot, air and to an extent by SUVs, which were used Sunday to transport the rescue teams. The route on foot takes about 2.5 hours.

The Bansko Town Hall had formed emergency headquarters with representatives from local police and forest rangers.

As elsewhere, forest fires are usual in Bulgaria for the drier and hotter months of summer and early fall, so the late fall occurrence in Pirin has few precedents.