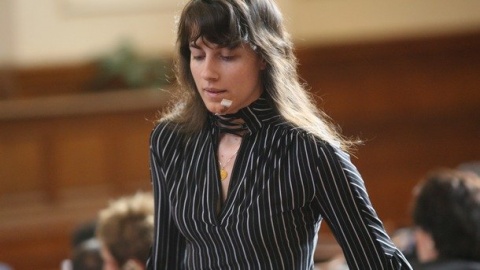 Bulgarian Ataka MP, Denitsa Gadzheva, is accused of breaking up the nationalist party over an alleged love affair with the party's leader. Photo by BGNES

Bulgarian Member of the Parliament, Denitsa Gadzheva, who, allegedly, caused a major rift in the far-right, nationalist Ataka party, has resigned from the party's leadership.

Two days ago, Ataka expelled its Member of the European Parliament, Dimitar Stoyanov from the party, after reports that Stoyanov has requested the resignation of party leader, Volen Siderov.

What is intriguing in the case is that the 28-year-old Stoyanov is a stepson to Siderov, and a natural son to his wife Kapka Siderova. The Siderov couple split recently, and, allededly, Ataka's leader now lives with Gadzheva, who is much younger than Kapka. Gadzheva also went to the same high school as Stoyanov and also numerous reports link the two romantically in the past.

Two days ago, Stoyanov accused Gadzheva, who is a second-term MP, of breaking up the party.

"I am resigning from Ataka's leadership to dissipate any suspicions about some personal relationship inside the leadership and personal favoritism. I want to halt attacks on Volen Siderov. I have witnessed all treasons of now-former Ataka MPs in my last two terms in the Parliament – I know they do it over greed or over power. You know well there was a person, who wanted to play the role of a Gray Cardinal in this party; pull the strings; hire and fire; play with people's fates. I am now attacked by this same person because I was the first one to say "stop" to this. She attempted to play with my destiny as well – this is why I was labeled a lover; hunted down; threatened, asked to resign. Attacks in tabloids followed as well," Gadzeva says, without, however, mentioning Kapka Siderova's name.

Many within Ataka insist it is not Siderov, but his estranged wife, who has been the strong figure in the nationalist party all along.

Last Wednesday, Tsveta Georgieva, announced she is the next MP to leave the Ataka parliamentary group. Media reported later that Georgieva and Siderova are sisters.

Volen Siderov claims the whole story is a plot between Prime Minister, Boyko Borisov, and Dimitar Stoyanov to deal a blow and eliminate Ataka.