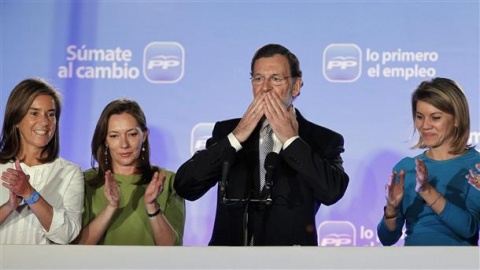 Spain's center-right Popular Party (PP), led by Mariano Rajoy, won about 44% of the votes in the country's general elections and will now have to tackle the debt crisis. Photo by EPA/BGNES

The PP, led by Mariano Rajoy, won about 44% of the votes, which gives it a clear majority in the lower chamber – with nearly all ballots counted, the PP is expected to take about 186 of the 350 seats in the lower house.

The Socialist Party, which has governed Spain since 2004, got 29% of the vote and admitted defeat.

Rajoy, 56, who won support by promising to deal with economic problems, said he was aware of the "magnitude of the task ahead".

He told supporters there would be "no miracle" to restore Spain to financial health, and that the country must unite to win back respect in Europe.

"Forty-six million Spaniards are going to wage a battle against the crisis," he said.

The Spanish elections are also marked by the fact that the ETA Basque separatist coalition Amayur is going to be represented in the new Parliaments with 7 seats, which it won just one month after the historical abandon of violence in its 40-years of armed struggle for independence.

The Catalonian Nationalist Party is expected to have anywhere between 13 and 15 Members of the Parliament, while the Coalition between the Greens party and the Communist party – 9-11.

Spain is among the European countries the most affected by the crisis along with Greece, Ireland, Portugal and Italy.

In October, the Standard & Poor's rating agency lowered the country's long-term credit rating from AA to AA- with negative forecast while Fitch lowered it from AA+ to AA-.

The most recent mass protests of "The Indignants" movement were held in Madrid just a week before Spaniards are going to the polls.

The demonstrators rally against bankers, financiers and politicians for what they see as corporate greed and government cuts of wages and social benefits and high unemployment rate.

The "Indignants" protests first took place in May in Madrid Spain and later spread to Europe, before reaching in September the center of global capitalism on Wall Street.