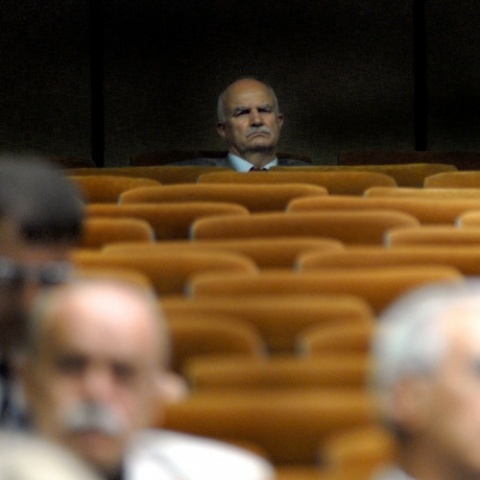 A file picture shows Bulgaria's former senior prosecutor Nikola Filchev sitting isolated at the very end of the hall during a meeting of heads of diplomatic and consulate missions abroad. Filchev served as Kazakhstan envoy until 2009. Photo by Sofia Photo

The United Kingdom Supreme Court, which has recently come under fierce criticism in Bulgaria for hampering the trial over the 2000 murder of a top local lawyer, suspects that it is linked to the mysterious death of a key prosecutor back in 2003.

"There is sufficient evidence, which would require every competent investigator to probe a possible connection between the murders of Nikolay Kolev and Nadezhda Georgieva," 24 Hours daily reported, citing the verdict of the court's judges.

Earlier this month the UK Supreme Court ruled against the extradition of a defendant in the murder trial of Bulgarian lawyer Nadezhda Georgieva, triggering a furious controversy in the Balkan country. The court saga over the murder of lawyer Nadezhda Georgieva, which has stretched over more than a decade already, resumed on Thursday. The next hearing has been scheduled for December.

London's refusal to extradite defendant Dimitrinka Kalajdzhieva, former secretary of the late Nikolay Kolev, who ran into hiding in Great Britain shortly after the murder, has been blamed for delaying the trial by more than three years.

Dimitrinka Kalajdzhieva, her husband Plamen and businessman Orlin Avramov has been accused of plotting the murder of Nadezhda Georgieva, who died in her home in Sofia on February 28, 2000 after suffering nine blows from a kitchen cleaver.

Bulgaria's current Interior Minister Tsvetan Tsvetanov was among the first to say that Nikola Filchev, Bulgaria's controversial and erratic former senior prosecutor, has masterminded the mysterious murders of a lawyer and a prosecutor back in 2000 and 2003.

"One of the versions is that former Chief Prosecutor Nikola Filchev and Aleksei Petrov, former agent of the State National Security Agency DANS, came together to eliminate Prosecutor Nikolay Kolev and lawyer Nadezhda Georgieva," Interior Minister Tsvetan Tsvetanov told the morning broadcast of TV 7 in the middle of November last year.

Georgieva was killed in her home in Sofia suffering nine blows from a kitchen cleaver on February 28, 2000. Witnesses claim the lawyer was handed USD 150 000 to give to Filchev as a bribe to make him stop an investigation against the state-owned deep-sea fishing company. Georgieva, however, did not give Filchev the cash and in a moment of a cyclophrenic crisis he killed her, plunging a kitchen cleaver in her head. Following his appeal submitting that he had neither reached the requisite age nor had asked for retirement, the courts decided in his favour. He resumed work as a prosecutor, this time at the Supreme Administrative Prosecution Office.

Within a short period of time after Kolev's public accusations, several sets of criminal proceedings were brought against him and members of his family, on various unrelated charges. In the first half of 2001, Kolev wrote to the authorities and the press stating that he expected he would be arrested on charges of illegal possession of drugs which would be planted on him in an attempt to silence him.

Kolev repeatedly voiced in public his fears that he might be killed as part of a merciless campaign against him orchestrated by the Chief Public Prosecutor. On the evening of 28 December 2002 he was shot dead in front of his home. An investigation was opened on the same day and a number of investigative steps were carried out in the days and weeks that followed, including expertises and witness questioning.

Although a number of new investigative acts were ordered and carried out, the investigation was suspended repeatedly for failure to identify the perpetrator.