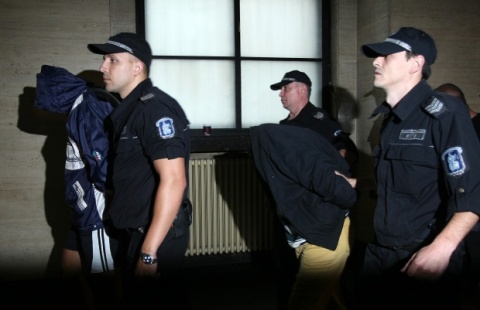 The Regional Court in Bulgaria's northern city of Pleven sentenced to 20 years behind bars Georgi Petkov AKA Dachi, who is part of the organized crime group codenamed "Killers."

The verdict was announced after a record-long, 12-hour debate between the magistrates. The rule can be appealed within a 15-day deadline with the highest instance – the Veliko Tarnovo Court of Appeals.

The case against Petkov started in February 2011 on charges he had attempted to murder Kamen Balbuzanov AKA Kukata (The Hook).

In November 2009, a little bit after 7 pm, The Hook was shot several times inside a Pleven coffee shop. He survived the assault after being listed in the hospital with four gunshot wounds. Bazlbuzanov, later, led the probe to Dachi, designating him as the perpetrator of the attack. The Hook is claiming damages in the amount of BGN 70 000.

Dachi is also investigated for an attempted murder in 2005 in the Black Sea capital Varna when Ivaylo Paunov AKA Giovanitto, whose name is connected with grand theft auto from Spain, was shot inside his own establishment.

Petkov is one of a number of people arrested in the summer of 2010 in what has been dubbed special operation "Killers" by Interior Minister Tsvetan Tsvetanov.

The operation was carried out by the police, DANS, and the Sofia City Prosecutor's Office in connection with the murder of the controversial Samokov football club president Yuriy Galev The President of the Bulgarian Sumo Federation Petar Stoyanov aka the "Chieftain" was among those detained.

After the arrest, President Parvanov's administration came out with an official statement refuting media allegations that Stoyanov is or has ever been an adviser to the President, but the chair of the Parliamentary Committee on Education, Science, Children, Youth and Sports, confirmed that Stoyanov was an adjunct advisor for them.

Tsvetanov announced a known criminal, Yanko Popov aka Tutsi, had ordered the murder of Yuriy Galev while the President of the Bulgarian Sumo Federation was one of the organizers Galev's murder. The other person ordering the murder was identified by the Minister as Vasil Kostov aka Vasko Ketsa (The Sneaker), who had also organized the murder of Shumen businessman Rumen Rashev.