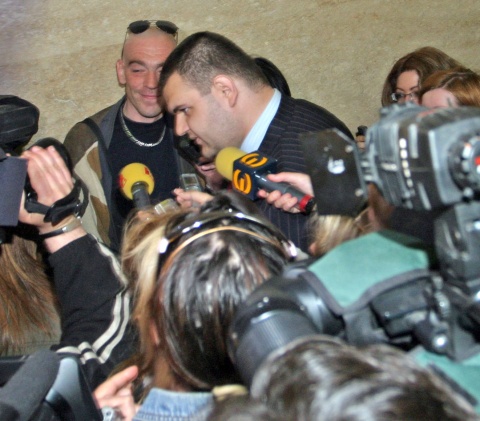 Delyan Peevski (pictured) is believed to be just the man, carrying around suitcases full of cash, the true leader behind the media monopoly being ethnic Turkish leader Ahmed Dogan Photo by Sofia Photo Agency

Media mogul Irena Krasteva and her son Delyan Peevski, who have been criticized for concentrating Bulgaria's media market in their hands and fawning to those in power, have acquired one more TV channel and four radio stations, reports say.

The popular music channel The Voice and four radio stations changed their owners on November 10. All the five media outlets, which include radios Magic, The Voice, Vitosha and Veselina were previously part of SBS Bulgaria group.

They have been acquired by AE Best Success Services Bulgaria, which is believed to be linked to Peevski, member of parliament on the ticket of the ethnic Turkish party, and banker Tsvetan Vassilev, head of Bulgaria's Corporate Commercial Bank.

The news comes half a year after the purchase of a large number of titles by media mogul Irena Krasteva and the recent squabbles over ownership of the WAZ assets in Bulgaria – the first ever monopolist on the local media market, dating back to the 90s - left a bitter taste in the mouth of the audience.

The beginning of August saw the latest development on the market and the expansion of the monopoly after one third of the shares of top Bulgarian daily Standart were, allegedly, bought by New Bulgarian Media Group, something the management of the daily firmly denies.

According to them Ahmed Dogan, leader of the Bulgarian ethnic Turks, largely known over the last decade as the country's back seat ruler, stands behind the monopoly on the local media market.