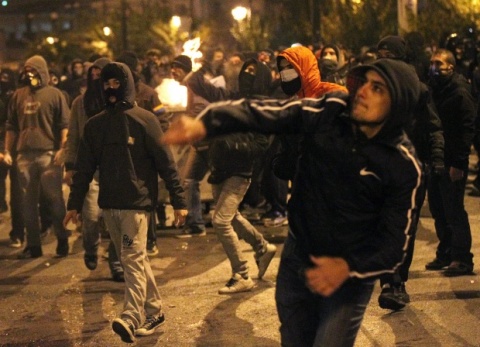 Greek student anarchists throw Molotov cocktails at the police during the march marking the 1973 of the students against the Greek dictatorship 1967-74. EPA/BGNES

Thousands of Greek youths marched Thursday in the streets of Athens against the new crisis cabinet, headed by PM Lucas Papademos, on the anniversary of the November 17, 1973 uprising against the military junta.

According to Athens police, some 15,000 flooded the streets of the Greek capital in a march traditionally starting from the Athens Polytechnic, the site of a valiant rebellion against the Regime of the Colonels that ruled Greece 1967-74.

Thursday protesters likened the austerity measures to be imposed by the new Papademos cabinet to the undemocratic rule by the military junta.

Some were carrying signs against what they said was "the junta of banks, EU and IMF. Another slogan read: "The Hunta Is Not Over: Rebel against Rule by the EU and IMF!"

Police clashed with protesters in front of the Greek Parliament, spraying tear gas after ralliers threw Molotov cocktails at them.

The economist technocrat Lucas Papademos took over the Greek cabinet end of last week in a bid to pursue further reforms and austerity to secure the 50% remission of the Greek national debt.

Just this Wednesday, the Papademos government, formed after the resignation of PASOK's George Papandreou by an intra-party consensus, won a vote of confidence in Parliament.