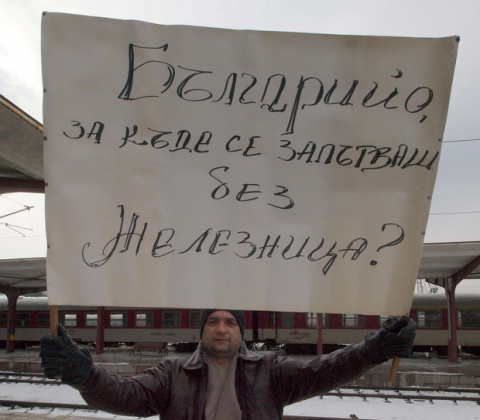 "Bulgaria, which way are you going without a railway?", asks the banner of a protesting railway worker in Varna in March 2011. Photo by BGNES

Bulgaria's government must know that the country's railway system will be fully blockaded by the general strike of the railway workers on November 24, railway syndicate leader Petar Bunev has stated.

Bulgaria's railway unions have vowed to stage a mass strike after the recent announcement of the management of the troubled state-owned BDZ Holding announced in early November that it intended to lay off 2 000 workers, and reduce the number of trains in operation by 150 by January 2011

"Our motivation to protest is growing day by and day and you must be sure that there will be a railway strike on November 24," Bunev said in Sofia Thursday.

The BDZ management announced earlier that 375 workers of the railways have agreed voluntarily to be laid off in exchange for a payment of six monthly salaries.

The workers are really worried by the idea of Finance Minister Simeon Djankov to up the retirement age by 1 year as of 2012.

"I cannot do enough to express the indignation of the railway workers, including the retiring ones, from the insults against them by BDZ CEO Yordan Nedev who said that the railway company was "trash." I would ask him if his consultancy reports about the three railway firms contain such terms because the current CEO made a lot of money from them. In his follow-up interviews he said he wouldn't be chopping off meat but fat with the BDZ reforms. Many people are very insulted," the syndicate leader said.

The syndicates have also been demanding a new collective labor contract from the BDZ company, and have risen up against the intended privatization of the only profitable unit of BDZ, BDZ Freight Services.

The austerity measures are supposed to help stave off the bankruptcy of the hugely troubled state railway company BDZ, declared recently the head of the BDZ Board Vladimir Vladimirov.

The combined austerity and layoff measures are supposed to save BDZ some BGN 22 M annually, and about BGN 105 M over the next five years; the funds in question are to be used to cover some of the debts of the ailing state company, according to Yordan Nedev, BDZ CEO.