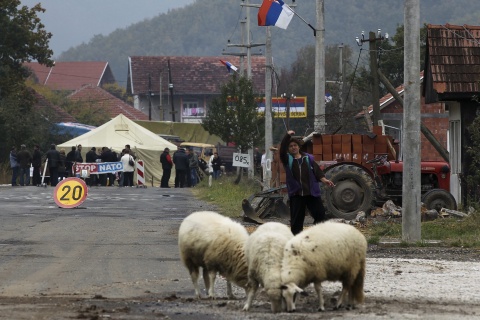 Kosovo Serbs gather near a road barricade in the village of Zupce, Kosovo, 25 October 2011. EPA/BGNES

"In the political sense, we fully understand the motives for Serbs living in Kosovo to make such applications ... and we will study them carefully," Lavrov said, in comments reported by the Interfax news agency, as cited by DPA.

Lavrov's remarks at a Moscow press conference came two days after Serbian activist Zlatibor Djordjevic announced from Kosovo that he had kicked off a campaign to obtain Russian citizenship for as many as 20 000 ethnic Serbs living there, and had begun submitting passport applications to Russia's Foreign Ministry, DPA reminds.

The applications would be acted on 'in accordance with Russian immigration law,' Lavrov said.

In a possibly related development, officials at Russia's Ministry of Emergency Situations (RMES) on Thursday announced the agency had dispatched a military transport plane loaded with humanitarian aid supplies to the Serbian city Nis.

Moscow considers Kosovo to be part of Serbia, and has not given recognition to the region's de facto independence. Russian nationalist politicians often call for greater Kremlin support to Kosovan Serbs.

Russia historically has been tough on extending citizenship to foreign nationals living inside the country, while at the same time liberally providing passports to ethnic Russians living in minority enclaves in other nations.

Russia's issue of thousands of passports to ethnic Russians living in the Georgian province South Ossetia and the Ukrainian province Crimea is one of the contentious issues in relations between Moscow, and Tbilisi and Kiev.

Serbs constitute 5-10% of the 2-million population and Albanians make up the majority of the people in Kosovo.

Albanian authorities proclaimed Kosovo's independence from Belgrade with support from the United States and the European Union in 2008.

Both Serbia and Russia have refused to recognize Kosovo's independence. Ethnic Serbs in Kosovo are bluntly opposed to the Albanian authorities in Pristina.

Tensions flared in Kosovo's ethnic Serbian enclave in October after Kosovo Albanians installed their customs officers at the Jarinje and Brnjak border crossings with Serbia.