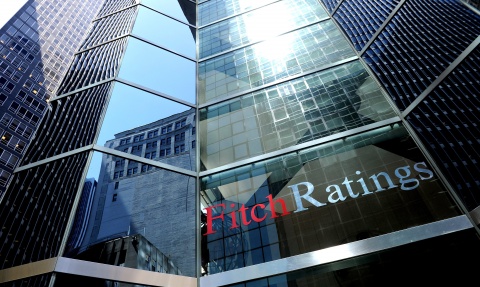 A file photograph showing a view of the offices of Fitch Ratings in New York, New York, USA, on 29 April 2010. EPA/BGNES

Bulgaria's 2012 state budget that was just approved by the Parliament in Sofia should put the country on a path to further reduce its deficit, international credit rating agency Fitch said.

In a statement released Thursday, a day after Bulgaria's 2012 budget was adopted, Fitch made it clear it views Bulgaria's Outlook as Positive but that it is unlikely that the rating would be upgraded without economic growth and stabilization of the banking sector.

"[Bulgaria's] draft budget targets a deficit of 1.3% of GDP. This is predicated on 2.9% economic growth, a level we consider optimistic given the slowdown in the eurozone. The European Commission, for example, puts Bulgaria's growth rate at 2.3%. However, Bulgaria has also based its figures on 1% revenue growth, which we consider to be cautious and achievable," Fitch points out.

It also stresses that Bulgaria's fundamental credit position is on the right track – "the country's economy has displayed impressive flexibility in adjusting to the global financial crisis."

"However, exports have driven the recovery and we expect those to weaken given the increasing risk of a recession in the euro zone.  It's this exposure to the eurozone that makes the Outlook uncertain.

"Then there are problems with the banking system. For one, the amount of non-performing loans has continued to increase. It is encouraging that rate of increase has slowed compared with at the start of the crisis," the international credit rating agency emphasized.

According to Fitch, foreign ownership of Bulgarian banks represents "another challenge."

It reminded that Greek and Italian institutions control over 40% of Bulgarian banking system assets.

Fitch predicted that "it is unlikely the Greek banks would be in a position to recapitalize their Bulgarian subsidiaries in the event of a major deterioration in asset quality.

"Italian-owned UniCredit Bulbank, however, accounts for approximately 15% of Bulgarian banking assets and we consider there to be a high probability that UniCredit would support this bank if it needed additional capital," the agency forecast.

Fitch further notes that Bulgaria's pre-crisis growth rates of over 6% were based on large capital inflows and rapid bank credit growth to the private sector, which is no longer available, and the lack of credit is likely to weigh on GDP growth.

"We consider the Bulgarian banking system to be sufficiently robust to the risk of an extreme deterioration in the Greek and Italian financial system. This is partly because the subsidiaries are relatively small compared to their parents, they do not hold significant quantities of Greek or Italian sovereign debt and the Bulgarian National Bank could limit attempts to repatriate funds that contravened prudential regulations.

"Notwithstanding the strength of the banking system, we cannot entirely rule out some kind of panic such as a deposit run. In the unlikely event that this did occur, we would expect the National Bank to act swiftly to provide liquidity to the largest banks," Fitch concludes.