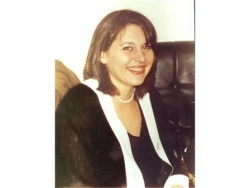 Georgieva was killed in her home in Sofia on February 28, 2000, suffering nine blows from a kitchen cleaver. Photo by 24 Hours daily

The court saga over one of the most mysterious lawyer murders in Bulgaria, which has stretched over more than a decade already, resumes on Thursday.

Lawyer Nadezhda Georgieva was killed in her home in Sofia, suffering nine blows from a kitchen cleaver on February 28, 2000.

The lack of progress in the legal proceedings so far has been attributed to the authorities' failure to bring back to Bulgaria one of the defendants - Dimitrinka Kalajdzhieva, a former prosecutor's secretary, who has run into hiding in Great Britain shortly after the murder.

A new and crucial witness is expected to appear in the court room on November 17. The man, identified as Iliya Nikolov, serves a sentence at the prison in the town of Lovech and argues he knows who killed lawyer Nadezhda Georgieva. He had however set a condition for speaking out and demanded that he strikes a deal with the prosecutors and get his sentence reduced in exchange.