Tsvetan Tsvetanov, the Man Who Wants to Lead Bulgaria into Schengen 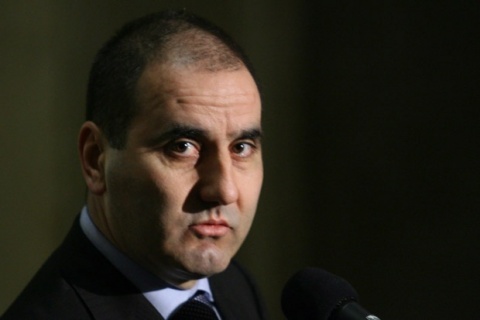 From The European Voice

When Tsvetan Tsvetanov entered the Bulgarian government in July 2009, secret cables sent from Sofia to Washington, DC by US diplomats conveyed a strong sense of hope. "Tsvetanov has a solid track record as an honest cop", the US ambassador, Nancy McEldowney, wrote about the interior minister-designate; another suggested that "the current government has an unprecedented opportunity to move forward with the most dramatic judicial and law enforcement reforms in decades". And the US's hopes remain consistent until the last available Wikieaks cable, from February 2010, when McEldowney's successor, James Warlick, described the arrest of a suspected crime boss as "a courageous act and emblematic of the government's stated commitment to fighting organised crime".

The EU too has noted marked progress in Bulgaria in the number of indictments in cases related to organised crime and fraud with EU funds. While a European Commission report in July noted that more needed to be done to fight organised crime, an inter-institutional EU expert group was still able to conclude this summer that Bulgaria was technically ready to join the Schengen zone.

For much of the intervening two years, Tsvetanov's political star rose. Indeed, until a few months ago it seemed that he would be the presidential candidate of the party that he leads, the centre-right Citizens for the European Development of Bulgaria (GERB). But a late change of plan saw GERB put forward Rosen Plevneliev, the minister for regional development (he duly became president in late October). That leaves Tsvetanov in the role he has played for the past decade, as the right-hand man of Boyko Borisov – Bulgaria's prime minister and de facto leader of GERB. The nature of the Borisov-Tsvetanov relationship has not changed over that decade: Borisov has always been the senior partner, while Tsvetanov has been Borisov's closest confidant, a status reflected in his position as deputy prime minister.

Both men are made from similar moulds, physically and professionally. Borisov is a hulking 53-year-old former karate coach, long-time member of the interior ministry and bodyguard who eventually became the national police commissioner, or 'general'. The 46-year-old Tsvetanov is a tough-looking sportsman (his first degree was in sport; he followed that with a law degree) who joined the police section of the interior ministry in 1987. Their friendship was forged in 2001, when Borisov became chief secretary of the interior ministry and Tsvetanov his assistant. When Borisov was elected mayor of Sofia in 2005, he took Tsvetanov along as his deputy – and when Borisov founded GERB in 2006, he made Tsvetanov the party's nominal leader since mayors were legally barred from being party leaders.

"The power of GERB is when Borisov and Tsvetanov are together and complement each other," Tsvetanov said, and there is little to indicate faultlines or rivalry in the relationship. "He knows to what extent he could act by himself and from which point he must ask me," Borisov said of Tsvetanov at GERB's founding conference. Tsvetanov's response was: "General, I will do my best not to bring shame on you." A relationship this tight lends plausibility to Borisov's explanation for not putting Tsvetanov forward for the presidency: Tsvetanov would, he said, be more valuable as a minister.

However, Tsvetanov has recently been shaken by a string of setbacks, both political and personal – shaken enough, some analysts believe, for Borisov to decide not to nominate Tsvetanov for the presidency. In the end, Plevneliev's victory was clear-cut (he beat his centre-left opponent by eight percentage points) but Borisov perhaps feared that Tsvetanov's image problems could cost votes.

Apparent policing successes have sometimes fallen apart, not aided by what the Commission has described as "serious deficiencies in judicial practice". Among the failures was the police operation (Octopus) that the US ambassador described in 2010 as "courageous" and "emblematic". One of its chief targets was the suspected leader of an organised crime group, Aleksei Petrov. "If Petrov's case ultimately leads to conviction it will go down as an arrest of historic proportions," the ambassador wrote. Instead, a court later concluded that no such criminal group existed; Petrov went on to stand in October's presidential election (winning just 0.9% of the vote).

The defects in Bulgaria's judiciary, dwelt on at length by the Commission, partly explain Tsvetanov's antagonistic relationship with the institution. Tsvetanov has frequently criticised judges for acquitting people he believes are criminals – but when he said that he would name police operations after magistrates who acquit suspects, the Bulgarian Helsinki Committee, a human-rights NGO, called for his resignation. For their part, judges have suggested nepotism was at work when a family friend of Tsvetanov – Vladimira Yaneva – was in June elected head of Sofia's city court, despite (in some judges' view) inadequate qualifications. Some judges staged a boycott in protest and last week another court overturned Yaneva's election, because the vote was secret, not open.

Tsvetanov, a native of the capital and father of three daughters, was also undermined by the revelation in 2010 that he owns six flats in Sofia. Some, it transpired, were inherited. Some he had bought with his own money. Prosecutors concluded in September that there was no evidence of tax evasion.

Questions about integrity were extended to his ministry this summer, when it emerged that it had received the equivalent of ?3 million from businesses and local authorities. The suspicions of influence-peddling were not eased by the discovery that the interior ministry – the best-funded in government – was supposedly spending the money on something as basic as petrol. Tsvetanov is now 'phasing out' donations.

Nor has Tsvetanov's stature been enhanced by his conspicuous absence when ethnic Bulgarians and Roma clashed in September near Plovdiv, Bulgaria's second city. Tsvetanov failed to return from leave or to take a stance.

Indeed, even small things have not gone his way: when a close family friend – a popular singer, Vesselin Marinov – sang a song praising the police, it prompted ridicule because it sounded like a communist-era song.

Such difficulties are not improving the international mood about Bulgaria, a problem made all the greater because the pending decision to admit Bulgaria into the Schengen zone is now a political one for EU national leaders.

Tsvetanov has a record that ensures he will remain widely appreciated in Bulgaria: he has, for example, stopped highway robberies and kidnappings. But, unfortunately for Bulgarians, accession to Schengen has risen to the top of the agenda at a point when Tsvetanov's previously waxing star has begun to wane.