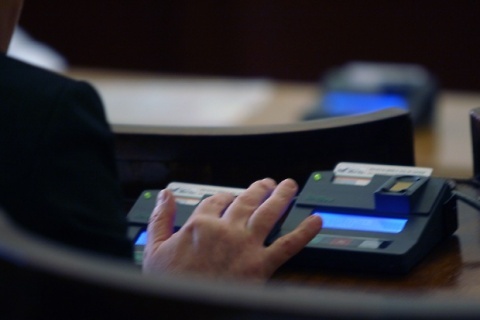 Bulgarian MPs from the ruling GERB party and the conservative RZS secured a go-ahead for the very conservative draft budget 2012 at first reading on Wednesday. Photo by BGNES

Bulgaria's parliament approved at first reading on Wednesday the draft budget for 2012, which aims at a budget deficit of 1.35% of gross domestic product, a growth of 2.3% and inflation of 2.5%.

The austerity draft budget was given the green light thanks to the votes of the MPs from the ruling GERB party and 17 independent ones, including those from the conservative Order, Law and Justice Party (RZS) – one of the strongest opponents of GERB until the October elections.

The opposition, left-wing Bulgarian Socialist Party (BSP) of the right-wing Blue Coalition, the ethnic Turkish Movement for Rights and Freedoms (DPS) and the far-right, nationalist Ataka did not suport the draft budget.

The draft does not include upping the minimum monthly wage from BGN 270 to BGN 290, effective May 1, 2012, or increasing State assistance for maternity leave from BNG 240 to BGN 270 – these changes will be passed at second reading.

It became clear Tuesday, after the meeting of the Three-Way Council between the business, the cabinet, and the trade unions, that only minimum retirement pensions (BGN 136 a month) will go up next year.

The TV channel bTV, citing unnamed sources at the Finance Ministry, reported these pensions will be increased to BGN 145, which will involve 700 000 retirees. Retirement age for both men and women will go up by one 1 year. The initial plan was to increase all pensions to BGN 200 a month without tying it with retirement age.

The draft budget also includes a provision giving the State the opportunity to get a bond issue from the international market up to BGN 2 B or the equivalent in foreign currency. This was included in budget 2011 as well, but now Finance Minister, Simeon Djankov, forecasts that it could be indeed used in 2012 over payment of global bonds in the amount of EUR 818 M, scheduled for January 2013.

The minimum threshold for the fiscal reserve is set at BGN 4.5 B, same as this year, while the initial idea to allow it to go down to BGN 3 B was later scrapped. The planned deficit under the consolidated budget is BGN 1.09 B or 1.3% of the Gross Domestic Product (GDP) with an expected deficit of BGN 1.96 B or 2.5% of GDP.

Over the worsening economic situation in the European Union and risks faced by Bulgaria, the cabinet meanwhile decided to allow updating the budget even before its final approval, meaning the budget can be changed in just weeks under the proposal of Members of the Parliament.