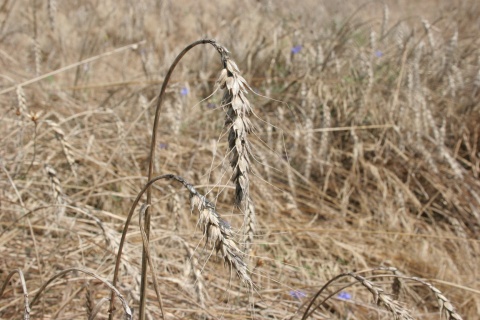 A joint operation of the Criminal Police General Directorate and the National Revenue Agency has uncovered a tax fraud gang involved in grain trading. Photo by BGNES

A special police operation codenamed "The Schemes - 4"carried out by the Criminal Police General Directorate and the National Revenue Agency has led to the break-up of a tax-fraud gang.

The fraudsters are believed to have drained BGN 5 111 000 from the state budget in the period January 2009 - March 2011, according to an announcement of the Interior Ministry.

Five suspects have been detained and the investigators have carried out 25 searches at premises located in Dobrich, Varna, Provadiya and Sofia.

Over 20 witnesses have been questioned and the police have seized accounting documents, waybills, stamps and computers from the sites searched.

The fraudsters engaged in grain trade, buying wheat, barley, rapeseed, sunflower, coriander and other types of crops without issuing documents and without declaring or paying taxes on the transactions.

The gang used fictive companies registered on behalf of illiterate people with a low socio-economic status.

The firms in question had no assets and no staff and did not pay VAT.

The fraud scheme also included a company which acted as a supplier or as an exporter to third countries and filed VAT refund applications.

Tax inspections are being carried out at some of the companies and of eight people.

Precautionary measures have been taken, including an injunction on agricultural produce worth BGN 500 000.