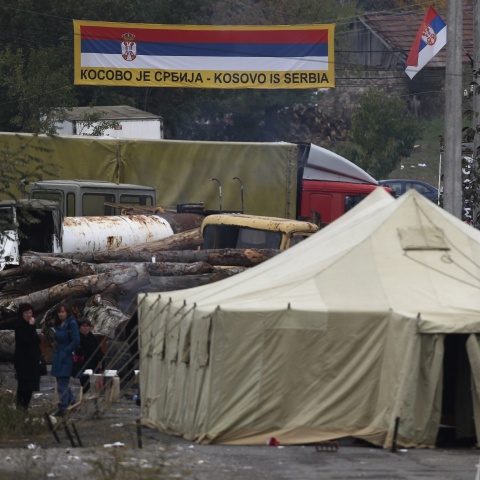 Kosovo Serbs gather near a road barricade in the village of Zupce, Kosovo, 25 October 2011. EPA/BGNES

The more than 20 000 Kosovo Serbs, who applied for Russian citizenship last week, were acting out of despair and disillusion in Belgrade's ability to defend the ethnic minority, a Serbian leader in Kosovo, Marko Jaksic, said on Tuesday.

Last week, Kosovo Serbs handed over a petition with signatures to the Russian Embassy in Belgrade, asking for Russian citizenship.

"Those who turned in the petition live mostly in the southern enclaves in Kosovo, further away from the administrative border between Kosovo and Serbia," Jaksic said, as cited by RIA Novosti.

Jaksic stressed that the decision of the Kosovo Serbs to seek Russian citizenship showed how hard their lives were.

"As Russian citizens they would be more secure compared to their current status when Belgrade has turned its back on them," Jaksic said.

Serbs constitute 5-10% of the 2-million population and Albanians make up the majority of the people in Kosovo.

Albanian authorities proclaimed Kosovo's independence from Belgrade with support from the United States and the European Union in 2008.

Both Serbia and Russia have refused to recognize Kosovo's independence. Ethnic Serbs in Kosovo are bluntly opposed to the Albanian authorities in Pristina.

Tensions flared in Kosovo's ethnic Serbian enclave in October after Kosovo Albanians installed their customs officers at the Jarinje and Brnjak border crossings with Serbia.