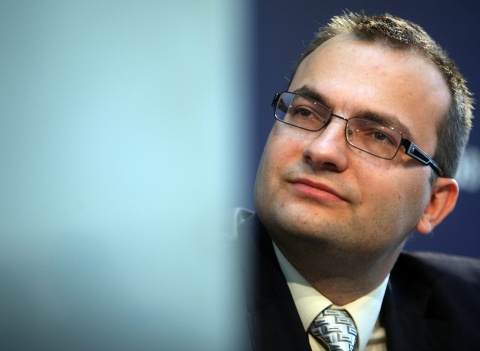 Right-wing leader, Martin Dimitrov, praises the fiscal discipline in budget 2012, but opposes what he sees as lack of measures for economic growth. Photo by BGNES

The right-wing would not offer parliamentary support for budget 2012, according to the co-Chair of the Blue Coalition and leader of Union of Democratic Forces, (UDF), Martin Dimitrov.

The statement confirms the right-wing position from last week when the other co-Chair, leader of Democrats for Strong Bulgaria party (DSB) and former Prime Minister, Ivan Kostov, said "three times NO" to the draft budget.

Dimitrov, however, added that this position should not be interpreted as criticism for Finance Minister, Simeon Djankov, and even advised Prime Minister, Boyko Borisov, to keep him as long as possible in order for the country to be financially stable.

The UDF leader explained that the critics are aimed at the lack of measures for economic growth and for dealing with poverty, not for the stability and fiscal rules embedded in the budget.

According to Dimitrov, growth can be secured by upping direct foreign investments and absorption of EU funds to the max.

Meanwhile, also on Tuesday, the opposition, left-wing Bulgarian Socialist Party (BSP) announced they would not back the draft budget as well.

Speaking for the left-wing, the BSP Member of the Parliament, Dragomir Stoynev, stressed this is the very first budget to deprive certain groups from social rights – mothers, retirees, and the handicap.

Stoynev was particularly critical about the lack of increase of retirement pensions and asked Borisov to try and live on an average pension for one month.