10 000 Unique Archaeology Treasures to Be Unveiled in Bulgaria 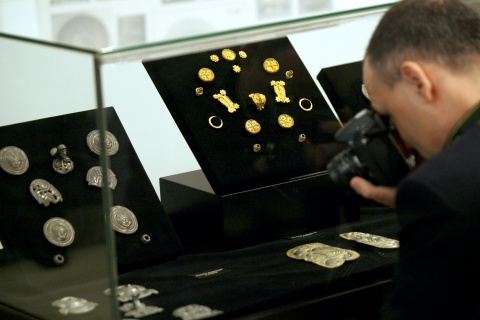 10 000 previously unexplored archaeological finds are to be shown to the public in Sofia. Photo by BGNES

The finds in question were seized from a treasure hunting and antiques trafficking crime group back in 2004, and are now being transferred from the Sofia City Prosecutor's Office to the ownerships of the National History Museum in Sofia.

They feature archaeological items from various ages – from prehistory all the way to the 20th century, the Bulgarian National History Museum announced.

Some of the more interesting treasures to be put on display include:

154 silver coins minted in the northwest of the Second Bulgarian Empire in the 14th century, as well as Venetian and Serbian coins;

56 silver coins minted by the last ruler of the Second Bulgarian Empire before it was conquered by the Ottoman Turkish Empire – Tsar Ivan Sratsimir, who was killed in 1396 AD by the Ottomans.

another set of 1 111 silver coins minted by both Tsar Ivan Shishman and the Ottoman Turkish sultan Bayazid I, who conquered most of medieval Bulgaria (most of these coins were kept by the traffickers in a shampoo bottle, the museum pointed out).

Gold and silver decorations created by the smiths in the Bulgarian Catholic center of Chiprovtsi in the 17th and 18th century;

A silver image of Virgin Mary from Byzantium's iconoclastic period from the 7th century AD crafted in the "Antioch style";

A metal image for St. Nikola from the 12-13th century from medieval Bulgaria;

A seal from 1867 AD that belonged to key Bulgarian revolutionary and freedom fighter Georgi S. Rakovski who fought for Bulgaria's Liberation from the Ottoman Turkish Empire;

A state order from the Third Bulgarian Empire ( State ) in the name of St. Cyril and St. Methodius that is believed to have belonged to Tsar Boris III (r. 1918-1943).

Samples from the 10 000 archaeological items in question will be formally presented to the media by the National History Museum in Sofia on November 16 in the presence of Finance Minister Simeon Djankov and Culture Minister Vezhdi Rashidov before they are added permanently to the collection of the museum.