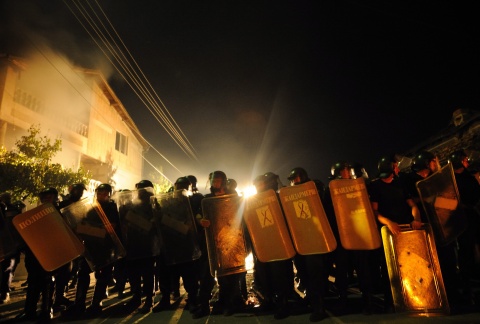 Bulgarian riot police guard a house set on fire during a protest in the village of Katunitsa, some 160 km from Sofia, Bulgaria 24 September 2011. Photo by BGNES

The Organization for Security and Co-operation in Europe (OSCE) has expressed its gratitude and its positive assessment of the government's stance and activities after the clashes in the southern Bulgarian village of Katunitsa in end-September, according to an announcement fo the Foreign Ministry.

"ODIHR appreciates the clear and unambiguous stance of the Bulgarian government, as well as that of the political, religious and social leaders, regarding the acts of violence in the village of Katunitsa. The swift action and the cooperation with the Roma community in the wake of the events have been decisive for gaining control of the escalated tension," the letter reads.

In the meantime, it was announced that the residents of the southern Bulgarian village continue their protests against the inaction of the police and the prosecuting authority on the case.

In mid-October, locals rallied against the slow pace of work of the prosecution on the investigation of the murder of 19-year-old Angel Petrov.

The death of the youth on September 23 triggered waves of protests across the country and numerous arrests on counts of hooliganism and incitement to ethnic hatred.

Petrov got run over by a van driven by an associate of Roma clan leader Kiril Rashkov, aka Tsar Kiro.

Rashkov and two of his grandsons were arrested and have been ordered to remain in custody.

In mid-October, the Regional Directorate for National Construction Control in Plovdiv issued 14 protocols establishing illegal construction at six properties of the Rashkovi clan.