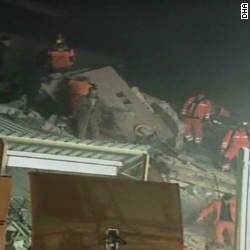 A 5.6-magnitude earthquake has killed at least five people in eastern Turkey, and trapped at least 100 under collapsed buildings, a deputy prime minister has said.

The death toll came from Deputy Prime Minister Besir Atalay, who spoke to reporters while visiting the stricken zone. He said the deaths occurred when two hotels collapsed. Another 20 people were rescued from the crumbled structures, he said.

About 20 buildings have collapsed, including a six-storey hotel in the city of Van, where dozens of aid workers and journalists were staying, BBC reported.

The quake late on Wednesday and was centred 16km (10 miles) south of Van. Parliamentary member Nazmi Gur said most of the buildings which collapsed were empty, but three had been occupied when the quake struck at 21:23 (19:23 GMT).

Rescue workers were using high-powered lights to work through the night.

The same region was struck last month by a 7.2-magnitude earthquake which killed more than 600 people.

That earthquake struck a little north of Van but the city became the headquarters of the relief effort and has been flooded by aid workers and journalists.

The city was only lightly damaged, but some of the weakened buildings are now thought to have been brought down.