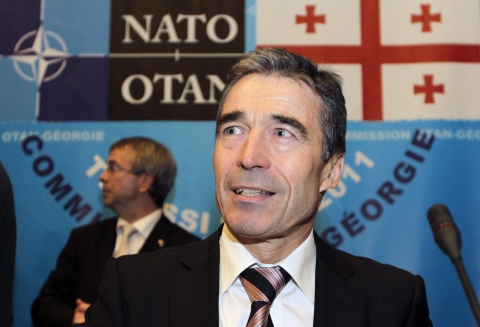 NATO Secretary General Anders Fogh Rasmussen has noted Georgia's progress toward integration with the Alliance and has called for a continuation of its reforms.

"Since our Bucharest summit, Georgia has come a lot closer to NATO," Rasmussen said at a meeting of the NATO-Georgia Commission, as cited by RIA Novosti, adding that there is still "work to be done in a number of areas."

"Further reforms will be "Georgia's ticket to membership in NATO," the NATO Secretary-General said.

NATO's Bucharest summit in 2008 opened the door to eventual Georgian membership in the alliance, and Rasmussen reaffirmed that decision.

At the same time, however, it is believed that precisely at the Bucharest Summit the USA bowed to the pressure of some of its key European NATO allies such as Germany and France against the accession of Georgia and Ukraine into the Pact that were fearful that such a move could anger Russia.

Rasmussen and a NATO delegation he leads arrived in the capital Tbilisi on Wednesday for a two-day visit.

The delegation, which includes members of the North Atlantic Council, will take part in a NATO-Georgia Commission session later on Wednesday. Rasmussen and Prime Minister of Georgia Nika Gilauri will open the session. A media briefing will he held later.

Georgian President Mikheil Saakashvili will meet with the NATO Permanent Representatives and Rasmussen in Batumi on November 10. Rasmussen will also meet with Chairman of the Parliament David Bakradze and with Georgian military personnel who have served in Afghanistan.