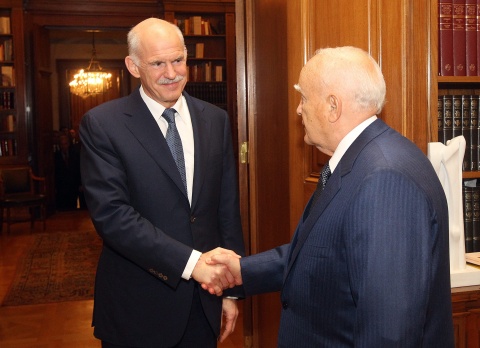 Greece's Socialist Prime Minister George Papandreou has formally resigned his post even though the name of his successor, who is to head a caretaker government, remains unclear.

Greek Prime Minister George Papandreou said in a televised address Wednesday that a government of national unity would do whatever was necessary to bring Greece out of crisis.

“Greece wants the international community to see that it knows how to be united in the face of difficulty,“ he said, as cited by CNN.

In the television address before heading to meet the president, Papandreou wished the new prime minister well without giving any name and declared that Greece had avoided bankruptcy.

He also said the new government would win approval for Greece's 130 billion euro bailout deal and secure the nation's membership of the euro zone despite its crisis.

"I am proud that, despite the difficulties, we avoided bankruptcy and ensured the country stayed on its feet," he said. "I want to wish the new prime minister success, I will support the new effort with all my strength."

"Today, despite our differences -- political and social differences do exist -- we have put aside our fruitless conflict and disagreement," Papandreou said.

After the televised address, Papandreou headed to the presidential mansion to tender his resignation to President Karolos Papoulias.

In an phone call earlier Wednesday, Papandreou told French leader Nicolas Sarkozy that the new government would have support from the majority and the opposition, the Elysee Palace said in a statement.

The latest updates come a day after the prime minister said he was optimistic about the formation of a new government amid thorny discussions.

Papandreou and the main opposition leader, Antonis Samaras, have been locked in talks on who might lead the new government. Rumored contenders include Lucas Papademos, a former vice president of the European Central Bank and ex-governor of the Bank of Greece, currently a visiting economics professor at Harvard University.

The political turmoil in Greece has shaken international markets, as investors fear a new bailout deal negotiated with European leaders late last month - which has stringent austerity measures attached - may not be implemented.

Christine Lagarde, managing director of the International Monetary Fund, warned Wednesday of the potential for a "lost decade" if the world's nations do not join forces against the "dark clouds" gathering on the horizon.