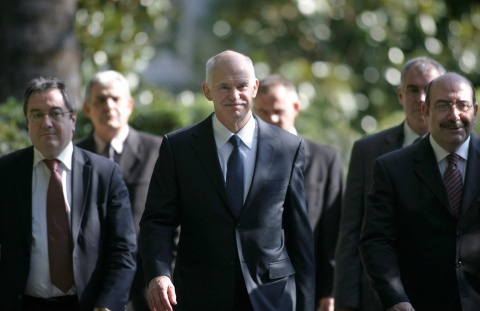 The members of the new Greek coalition cabinet are expected to be announced Wednesday afternoon, after overnight negotiations fell through.

The Bulgarian news agency BTA cites several leading international media outlets reporting that the final decision is still pending because there have been issues with the nomination of former central banker and former Vice President of the European Central bank (ECB), Lukas Papademos.

Prime Minister George Papandreou is holding yet another meeting with Greek President Karolos Papoulias, around noon Wednesday. After that Papoulias is to attend a gathering of political parties' leaders where the new cabinet will be announced.

Papandreou has been seen leaving the Parliament building a little bit after midnight, after, the now 3-day-long negotiations with opposition leader, Antonis Samaras (New Democracy) have once again stalled, despite strong pressure from EU to find a solution of the political crisis, which is threatening the eurozone.

Unnamed sources are quoted saying that both Papandreou's PASOK and New Democracy have objections to Papademos' nomination and the latter had made too many demands and voiced too many requests.

According to local media, other solutions sought by Papandreou and Samaras, include Filippos Petsalnikos, Speaker of the Parliament and Apostolos Kaklamanis, Member of the Greek Parliament from PASOK, but both have denied such reports. The name of Finance Minister, Evangelos Venizelos, had also emerged earlier.

The new coalition cabinet's immediate task would be to approve and implement the EU bailout package for the heavily indebted country. Snap general elections are, most likely, going to be held in February.