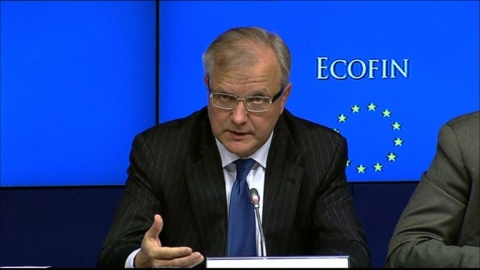 EU finance commissioner Olli Rehn speaking at a press conference Tuesday after a meeting of EU ministers of finance. Photo by EPA/BGNES

EU financial affairs commissioner Olli Rehn has requested that Greece sign a guarantee to abide by austerity measures to be implemented in its second rescue plan.

In this, Rehn has followed up Eurozone President Jean-Claude Juncker, who asked for a similar written commitment Monday.

In his Tuesday statement, Rehn further described the earlier intention voiced by Greek PM George Papandreou to hold a referendum on the austerity and rescue plan as "breach of trust."

"Greece violated the terms of the rescue plan - it is time it restores the healthy contact with other eurozone members," said Rehn at a press conference after a council of EU finance ministers.

Earlier Tuesday, Andonis Samaras, leader of the Greek opposition party New Democracy had said he is not in favor of such a written agreement.

Currently Samaras is holding talks with PM George Papandreou over the leadership and composition of the crisis cabinet set to take over after the imminent resignation of the PM.

All cabinet ministers have already handed their resignations to Papandreou, who in turn is expected to hand in the cabinet resignation to President Karolos Papoulias later on Sunday evening.