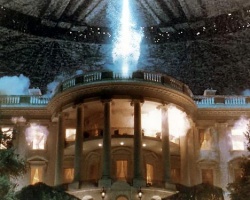 Aliens destroy the White House in the film Independence Day. Photo by The Daily Mail

In an answer to a petition asking the Obama Administration to acknowledge an "extraterrestrial presence on Earth", the US government has officially denied having any information about the existence of alien life forms.

"The U.S. government has no evidence that any life exists outside our planet, or that an extraterrestrial presence has contacted or engaged any member of the human race," wrote Phil Larson of the White House Office of Science and Technology Policy in a blog post on the White House website.

"In addition, there is no credible information to suggest that any evidence is being hidden from the public's eye,"Larson further declared in his statement.

However, the White House has pointed out that the subject of life outside our planet is being discussed and explored. A host of government agencies are working "toward the goal of understanding if life can or does exist off Earth," Larson has pointed out.

According to the petition to which the White House responded on Tuesday, opinion polls now indicate that more than 50% of the American people believe there is an extraterrestrial presence and more than 80% believe the government is not telling the truth about this phenomenon