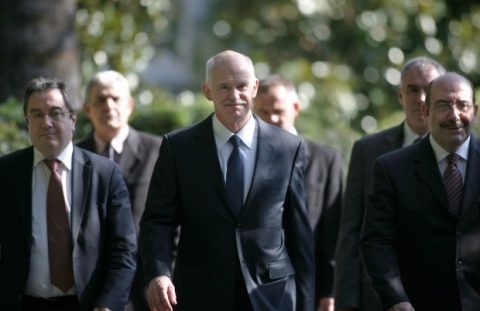 The new unity government of Greece will not be chaired by Papandreou. Photo by EPA/BGNES

The major political powers in Greece have reached an agreement to form a unity government, according to a statement of the office of Greek President Karolos Papoulias.

Under the deal, Greece's government of national unity will not be headed by current Prime Minister and leader of the socialist party PASOK George Papandreou.

Тhe name of the new Prime Minister of Greece will be announced Monday.

More talks will take place in the morning to decide who will lead the coalition. Once the new leader has been named, the president will invite all parties to join the national unity government, the statement said.

There has been speculation that the new governing coalition could be led by Finance Minister Evangelos Venizelos.

The new Greek Cabinet is to implement the terms of the second international bailout for Greece which provides for a loan of EUR 130 B and a 50% write-off of Greek debt by creditor banks in exchange for a strict austerity program.

In addition the new government will prepare the stage for the holding of general elections in March 2012.