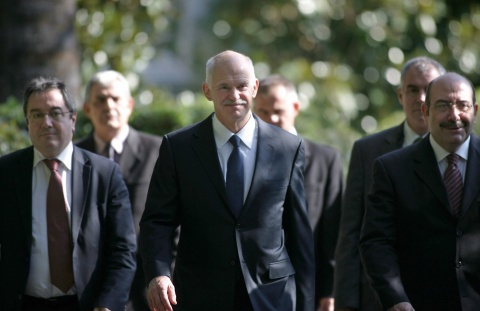 After his Cabinet received a vote of confidence in Greece's Parliament overnight, Papandreou met on Saturday with the country's President to discuss the options for a coalition government of national unity.

A total of 153 MPs out of 300 have backed the government, while 145 voted against, Greek media reported, in a confidence vote than at about 1 am Eastern European Time.

Papandreou told the Greek president that the nation had to forge a political consensus to prove it wanted to keep the euro, as European leaders try to persuade the outside world that the currency bloc can overcome its huge debt problems.

"In order to create this wider cooperation, we will start the necessary procedures and contacts soon," he told reporters after meeting President Karolos Papoulias, as cited by international media.

Hours after surviving a parliamentary confidence vote, Papandreou said Greece had to avoid early elections, calling for a broad-based government to secure a bailout from the euro zone, the main weapon in Europe's battle against the spreading economic crisis.

"My aim is to immediately create a government of cooperation," he told the president in the presence of reporters before they held talks behind closed doors. "A lack of consensus would worry our European partners over our country's will to stay in the euro zone."

Political sources involved in the dealmaking said negotiations are being led behind the scenes by Finance Minister Evangelos Venizelos, who aims to head the new coalition.

The sources said Papandreou, a socialist whose father and grandfather were Greek prime ministers, would step aside to make way for Venizelos, the man he beat to his PASOK party's leadership in 2004.

Without saying when he might quit, Papandreou said he was ready to discuss who should lead the new government which would rule until elections probably early next year.

"The last thing I care about is my post. I don't care even if I am not re-elected. The time has come to make a new effort ... I never thought of politics as a profession," he told parliament before the vote in the early hours of Saturday.

A new coalition is likely to exclude the main opposition party, the conservative New Democracy.

Papandreou said the coalition should aim to ram the 130-billion-euro bailout deal through the assembly, the last financial lifeline for a nation that is due to run out of money in December.

Under heavy domestic and international pressure, the prime minister has backed down on a proposal for a referendum on the euro zone rescue. Greek voters could well have rejected the deal, potentially sinking euro zone leaders' attempts to stop the debt crisis devastating economies such as Italy and Spain.