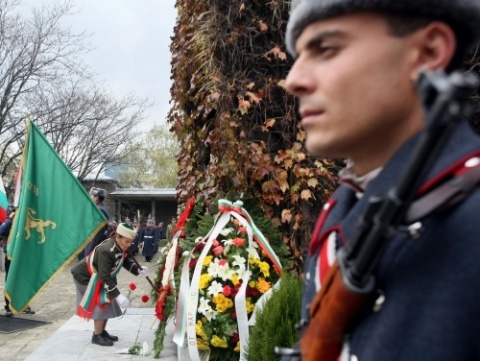 The formal ritual of the Bulgarian state and the Bulgarian Orthodox Church for honoring the souls of the fallen soldiers on Archangel All Souls Day at the Monument of the Unknown Warrior in Sofia. Photo by BGNES

All Souls' Day is also known as the Feast of All Souls, Commemoration of all the Faithful Departed. The Eastern Orthodox Church dedicates several days throughout the year to the dead, mostly on Saturdays, because of Jesus' resting in the tomb on Saturday with the All Souls' Day before having a special significance.

Archangel All Souls' Day is called Men's All Souls' Day as well. This is the day when the souls of all those who died as fighters for Bulgaria are honored, including those who served in the modern Bulgarian Army.

As part of the commemorations a solemn mass will be served at the Military Cemetery in Sofia in the presence of President, Georgi Parvanov, Defense Minister, Anyu Angelov, Head of Defense, Gen. Simeon Simeonov, high-ranking military officers, servicemen, and representatives of Bulgarian Patriotic Unions.

Masses and ceremonies will also be held at the Sofia Military Academy "Georgi S. Rakovski," and "The St. Nedelya" cathedral along with many events all across the country.

The Bulgarian Orthodox Church rituals honoring the souls of the fallen soldiers on Archangel All Souls' Day first started in 1924. Their holding was terminated in 1946, after the communist coup of 1944, and was restored in 1992.