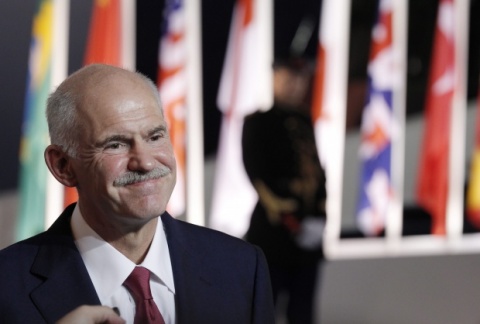 Greek PM Papandreou has won a much feared confidence vote. Photo by EPA/BGNES

A total of 153 MPs out of 300 have backed the government, while 145 voted against, Greek media reported, in a confidence vote than at about 1 am Eastern European Time.

However, reports say that even though Prime Minister George Papandreou has survived the confidence vote, in the long term, his prospects for remaining as leader seem slim.

Papandreous now faces a tough task of trying to form a government of national unity. Talks are expected to start on Saturday.

In an address to parliament before the vote he ruled out snap elections, saying they would be "catastrophic". He said he did not care about his post and the leadership of any government of national unity would be negotiable.

Papandreou previously shocked EU partners and sent markets into turmoil after calling for a referendum on the EU deal to bail out debt-ridden Greece.

Late Friday night Papandreou said the bail-out deal currently on offer by the EU had to be accepted, and it would be "historically irresponsible" to lose it; in his words, immediate elections would be "catastrophic" for the deal, so proposed a new coalition to take charge until it had been agreed.

"I have been in contact with the president and I will visit him tomorrow (Saturday) to inform him of my intentions and that I am moving forward with all the parties for a broader coalition government, and to agree on common goals, a timeframe and people, to agree on its composition and even the head of this coalition," he said. "I therefore ask for a vote of confidence in order to ensure the security of this nation."

The vote took place after several hours' debate. Papandreou addressed parliament for more than half an hour. Meanwhile, thousands of protesters had gathered in Athens' Syntagma Square.

Eurozone leaders fear that failure to solve the Greek debt crisis could risk it spreading to other vulnerable economies, particularly Italy.

The figures in the Greek parliament revealed Papandreou's vulnerability. His governing Socialist party (Pasok) held a tiny majority - 152 out of 300 seats. In the end 153 MPs voted for the government.

The vote was timed to take place when the markets in Europe and the US are closed.

Papandreou will seek a broad consensus on last week's bailout deal for Greece negotiated in Brussels, reaching out to the opposition. And he will inform the president that he intends to begin talks on forming a national unity government.

The political situation in Greece still seemed far from certain. Leader of the main opposition New Democracy party Antonis Samaras rejected the prime minister's idea of a coalition government and repeated his demands for immediate elections.

The proposed referendum had caused serious divisions in Pasok, with Finance Minister Evangelos Venizelos insisting it should not be held. He told European partners on Friday that Greece had officially scrapped the referendum.

Papandreou had earlier said the referendum was never an end in itself, and there were two other choices - an election, which he said would bankrupt the country, or a consensus in parliament.

Earlier on Friday, European Commission President Jose Manuel Barroso told the BBC he expected a government of national unity to be formed in Greece and that the economic problems "will be solved".