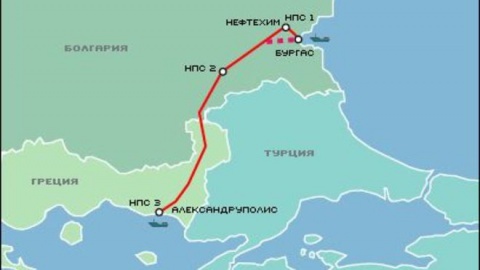 Bulgaria's Environment Ministry has issued a positive ruling on the paperwork submitted to it by "Trans-Balkan Pipeline" for the Environmental Impact Assessment (EIA) of the Burgas-Alexandroupolis oil pipeline project.

The decision of the Bulgarian eco ministry does not mean a final approval and a go-ahead of the construction of the project but it allows the evaluation process to go ahead at public hearings; however, had it been negative, it would have killed the BA oil pipeline.

"The ruling of the competent institution is that the EIA paperwork has analyzed the risks for the environment that the Supreme Expert Environmental Council should take into account in the event of a realization or non-realization of the project on Bulgarian territory. Based on this rule, we can go ahead with the procedure for approval by organizing public hearings with the respective municipalities on Bulgarian territory, which is the responsibility of contractor," the Environment Ministry has said in a press statement published late Thursday night.

The eco ministry has sent a letter to the contractor – the Bulgarian-Greek-Russian company Trans-Balkan Pipeline with instructions for the further phases of the procedure. Thus, TBP is supposed to provide public access to the entire paperwork on the project, and to organize meetings for public hearings in towns and villages along the proposed route of the Burgas-Alexandroupolis pipeline.

The Environment Ministry further explains that public hearings can be held simultaneously in Bulgaria and Greece if the environmental authorities of both countries confirm that the entire paperwork is available to the public.

"The results from the public access to paperwork and public hearing will be of extreme importance about completing the procedure, the discussion by the Supreme Expert Environmental Council (a body of government and NGO experts – editor's note), and the making of a final decision on the Environmental Impact Assessment by the Minister of Environment and Waters," the Bulgarian Ministry has explained.

According to the Bulgarian legislation, the Minister of Environment is supposed to issue a final decision on the fate of the Burgas-Alexandroupolis oil pipeline with 45 days of the completion of the last public hearing meeting.

Earlier this week, on Monday, Bulgaria's Environment Ministry postponed by one addition week its final decision on the fate of the troubled Burgas-Alexandroupolis oil pipeline project.

On Monday, October 31, the Ministry was supposed to make public its pronouncement on whether the environmental impact assessment met the eco requirements of the Bulgarian legislation.

However, it made it clear that its experts need one more week to complete their evaluation of the document submitted to them by Trans-Balkan Pipeline, the Bulgarian-Greek-Russian company in charge of the pipe, reported Novinite.bg.

Trans-Balkan Pipeline BV, a Bulgarian-Greek-Russian government consortium, submitted the revised and supplemented ESIA (environmental and social impact assessement) report to the Ministry of Environment and Water of Bulgaria on September 30, 2011, within the term set by the Ministry

The EIA of the Burgas-Alexandroupolis pipeline project company had been rejected and returned for correction three times by the Bulgarian Environment Ministry over the recent months, casting ever greater doubts on the fate of the controversial oil pipeline initiative.

The newly submitted report by TBP is said to be of enormous volume, which, according the government sources, is taken to mean that the EIA has been thoroughly reworked.

If the Environment Ministry in Sofia approves the report, its word still will not be final since the report will then be referred for a public discussion, and will then be taken to the Supreme Expert Environmental Council, a body of government and NGO experts.

However, the project would be dead, if the Bulgarian Environment Ministry rules that the report is inadequate.

Last month, Russian oil pipeline monopoly Transneft said it will freeze the construction of the troubled Burgas-Alexandroupolis project, which has been largely obstructed by Bulgaria's government in the past 2 years.

Bulgaria's Environment Ministry had given TBP until September 30, 2011, to submit anew its environment assessment impact study on the troubled oil pipeline project.

TBP had requested the extension in mid July, a government spokesperson said Monday.

The new delay on the final decision of the BA pipeline's fate came after in June 2011 Bulgarian Environment Minister Nona Karadzhova had declared that she gave Trans-Balkan Pipeline a final chance – a two-month extension – in order to fix the environmental impact flaws in its project.

Shortly after that the Bulgarian government approved a contribution to the Bulgarian state company for the construction of the vastly troubled pipeline, which was at the bare minimum for keeping alive operation of the company, which holds on behalf of Bulgaria a share of 24.5% in the Trans-Balkan Pipeline company, a joint venture of Bulgaria, Greece, and Russia.

Transneft does not rule out finding a route bypassing Bulgaria to deliver Russian oil through Greece to the Mediterranean, Tokarev said.

The 300-km pipeline, planned to link the Black Sea port of Burgas to Alexandroupolis on the Aegean Sea, is designed to transport 35 million tons of oil a year, with a possible expansion to 50 million tons, to ease the tanker traffic burden in the Bosphorus and the Dardanelles straits.