Merkel: Do Greeks Want to Stay in Eurozone? Yes or No! 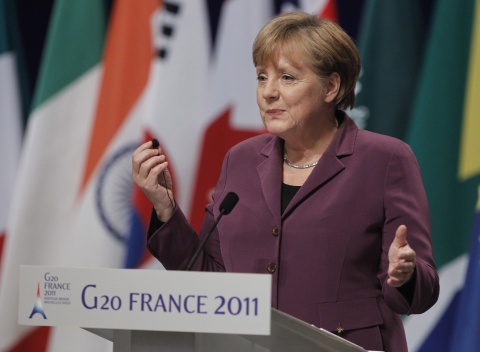 Eurozone leaders have said the upcoming referendum in Greece on the bailout package would decide the country's euro future.

''The referendum is about nothing else than the question does Greece want to stay in the eurozone? Yes or no," German Chancellor Angela Merkel said on Wednesday after a mini-Eurozone summit in Cannes ahead of the G20 meeting.

Chancellor Merkel said the eurozone leaders wanted Greece to remain a part of the group, but insisted that the Greek government's decisions were threatening to destabilise the region.

"The euro as a whole must remain stable," Merkel said. "We would prefer to ensure this with Greece rather than without it. But the top priority is stability."

President Sarkozy added: "There are rules that form the stability pact. It's up to Greece to decide if they want to continue the adventure with us".

Greece's Prime Minister George Papandreou has said that the referendum is effectively a decision on whether to stay within the single currency.

The fear is that people may vote against the deal, a move that many feel may jeopardise efforts to resolve the debt crisis.