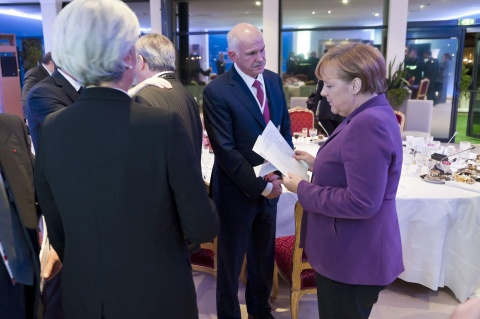 The G20 leaders are due to meet in France on Thursday amid rising concerns over a possible deepening of the eurozone crisis and a Greek disorderly default.

On Wednesday, eurozone leaders withheld the latest EUR 8 B rescue loans for Greece until after its referendum on the package, which is expected to take place on 4 or 5 December.

German Chancellor Angela Merkel has said the vote was over whether Greece wanted to stay in the eurozone.

Chancellor Merkel said the eurozone leaders wanted Greece to remain a part of the group, but insisted that the Greek government's decisions were threatening to destabilise the region.

"The euro as a whole must remain stable," Merkel said. "We would prefer to ensure this with Greece rather than without it. But the top priority is stability."

President Sarkozy added: "There are rules that form the stability pact. It's up to Greece to decide if they want to continue the adventure with us".

US President Barack Obama is scheduled to hold a meeting with the French President Nicolas Sarkozy on Thursday, at which the two leaders are expected to discuss the eurozone crisis.