Germany, France: Not a Cent for Greece if Voters Say No 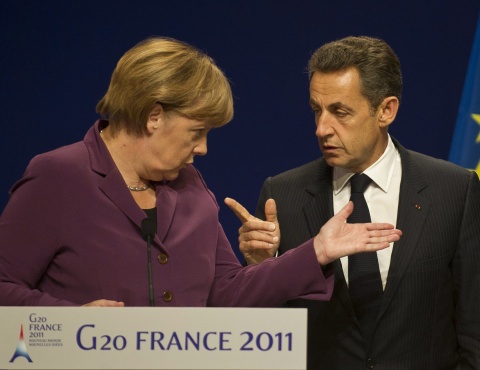 French President Nicolas Sarkozy met on Wednesday with German Chancellor Angela Merkel at what has been described as a mini-Eurozone summit in Cannes, France. Photo by EPA/BGNES

Greece would not receive a "single cent" of aid if voters in an upcoming referendum reject the European Union bailout package, German Chancellor Angela Merkel and French President Nicolas Sarkozy have warned.

Sarkozy met on Wednesday with German Chancellor Angela Merkel, officials from the International Monetary Fund and European institutions to discuss the Greek situation at what has been described as a mini-Eurozone summit in Cannes, France.

The gathering took place before a meeting Chinese President Hu Jintao and then Papandreou later in the evening.

Group of 20 leaders gather in Cannes on Thursday.

Greece is expected to vote on a referendum on the European Union bailout package in the first week of December, most probably on December 4, according to reports.

International Monetary Fund Managing Director Christine Lagarde said she would make a recommendation to the IMF Executive Board regarding the sixth tranche of the loan as soon as the referendum is completed, and all uncertainty removed.

"I welcome the Prime Minister's indication that the referendum which has been announced will take place as soon as possible so that the Euro Summit agreement can be implemented expeditiously," Lagarde said.

Without the agreement of Greece to the EU/IMF program, the conditions for Greek citizens would become much more painful, in particular for the most vulnerable, European Commission President Jose Manuel Barroso said in a statement on Wednesday.