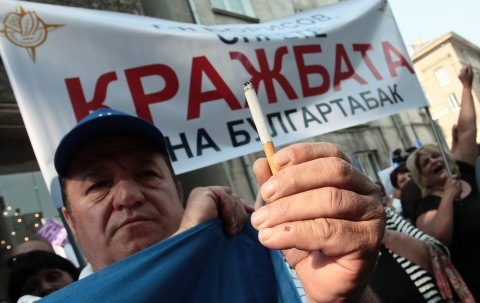 Workers of Bulgarian cigarette giant Bulgartabac are pictured in early Septmeber protesting against the holdings privatization that their banners describe as a "theft". Photo by BGNES

The new members of the Board of Directors of Bulgartabac are Alexander Yurievich Romanov, Yavor Nikolaev Draganov, Angel Dimitrov, Dimitrov, Ventsislav Zlatkov Cholakov, and Miglena Petrova Hristova, according to an announcement of the Bulgarian Stock Exchange made Tuesday.

Alexander Romanov is one of the top executives of VTB Capital, a subsidiary of the Russian Foreign Trade Bank (VTB); Cyrpus-based VTB Capital acquired 79.83% of Bulgartabac through its Austria-registered firm BT Invest for the price of EUR 100.1 M in October 2011.

Yavor Draganov is a partner at New Age OOD and Geopack OOD, and has Masters' degrees in finance and law, reported investor.bg.

Ventsislav Cholakov is the manager of Billa Bulgaria, and a partner in Ivel-M OOD; he has degrees in engineering and finance.

Miglena Hristova is a partner at "El-M and G" OOD; she has a degree in tobacco technologies and tobacco products.

The new shareholders of Bulgartabac have let the previous Board of Directors go; it consisted of Alexander Manolev, Georgi Kostov and Ivan Bilarev.

The transfer completed the highly controversial privatization deal of the Bulgarian tobacco giant which was concluded relatively quickly after VTB remained the sole bidder for what once was the pride of the Bulgarian cigarette-making industry with vast markets in the former COMECON.

The formal new owner of Bulgartabac is BT Invest, a firm registered in Austria owned by VTB, which now has 5 881 380 shares (almost 80%) of Bulgartabac, the Privatization and Post-privatization Control Agency announced.

The deal was finalized after the buyer paid 20% of the EUR 100.1 M selling price (a mere EUR 100 000 more than the minimum price set by the Bulgarian government in the privatization tender) on the day of the signing of the purchase papers, and then paid the remainder of the sum.

The Privatization Agency said that the money the state got from the sale of Bulgartabac will be directed into the state budget, and will then be fully transferred into the so called Silver Fund, a state retirement fund set up in 2008 in order to cover future pension system deficits caused by Bulgaria's aging population.

The money in the Silver Fund comes from privatization deals, concessions, and budget surpluses (if any).

The "real" Bulgartabac buyer remains unknown because it is believed that the Russian state bank is acting as an intermediary. BT Invest, the formal buyer registered in Austria, is formally owned by VTB Capital, a company based in Cyprus and owned by the investment department of the Russian bank VTB. VTB, however, is believed to be working for an unknown client whose identity it did not wish to reveal.

This situation has fueled various speculations about who really bought Bulgartabac, with guesses including certain influential Bulgarian political and business circles.

At a Parliament hearing in September, the top Bulgarian privatization official refuted numerous media reports and allegations by political figures that a Bulgarian entity connected with Bulgaria's Corporate Commercial Bank, believed to finance the media group of mogul Irena Krasteva, and Vinprom Peshtera as the mysterious buyer, which in turn are believed to be tied with the ethnic Turkish party DPS (Movement for Rights and Freedoms).

The contract bans the resale of the holding in the next ten years, a condition which can be skipped through a change in the ownership of BT Invest; this possibility has been admitted by the Bulgarian Privatization Agency.

A Russian investment fund is the actual owner of BT Invest, according to Emil Karanikolov, who refused to reveal the name of the entity in question but said he would provide the documents for the deal to the Members of Parliament.

Since 100% of the capital of VTB Capital is owned by the Russian bank VTB, it cannot be considered an off-shore company, Karanikolov said.

The holding currently owns the two larger and more consolidated factories in Sofia and Blagoevgrad, a processing plant in Yasen near Pleven, as well as a number of commercial brands.