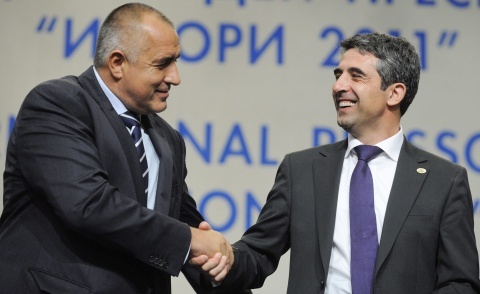 Two days after he declared he would never run for President, Bulgaria's Prime Minister and leader of the ruling centrist-right GERB Boyko Borisov announced he will be seeking a second term in his current office.

In an interview for the bTV private channel on Tuesday, the Prime Minister pointed out that no political party in Bulgaria, including the oppositional Bulgarian Socialist Party (BSP), would go for snap elections right now, since he believed that "GERB is ruling well and no one wants to take over at times of crisis."

The next parliamentary elections in Bulgaria are scheduled for 2013, when the term of GERB's minority government ends.

"For the past 20 years, there have been two centrist players who have heavily defeated everyone who has underestimated them – Parvanov and Dogan. Everyone wants to be like them, especially the right-wingers, but they are far from achieving that, since these two achieved their goals once again," Borisov stated.

He listed a number of Bulgarian towns and cities which Parvanov visited to present his memoirs, pointing out that these were exactly the places later won by the Bulgarian Socialist Party in the country's local elections. Dogan's Movement for Rights and Freedoms collaborated actively for those victories, Borisov claimed.

The Prime Minister called on all democratically thinking folks, including the supporters of the right-wing parties Union of the Democratic Forces and Democrats for Strong Bulgaria that initially supported GERB's government, to stand up against Parvanov and Dogan, whom he described as "undemocratic".

GERB is not euphoric over its considerable success in Bulgaria's local and presidential election runoffs on Sunday, since it has a lot of work left to be done, Borisov also stated.

GERB also achieved  an overwhelming majority of mayors in regional capitals throughout the country, nearly twice as many as those won by the opposition socialists.