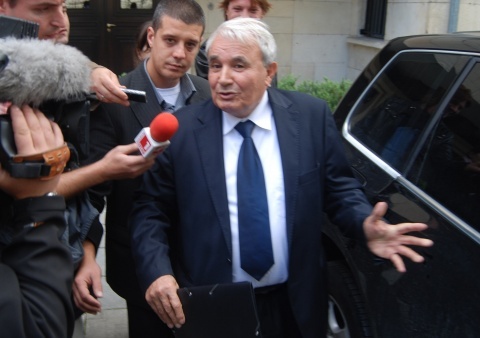 Stoyan Kushlev, who was removed from his second term in office as Chair of the Commission for Establishing Property Acquired through Criminal Activity, has been cleared of conflict of interest. Photo by BGNES

A three-judge panel of the Supreme Administrative Court (VAS) has cleared Stoyan Kushlev of conflict of interest charges for his tenure as Chair of the Commission for Establishing Property Acquired through Criminal Activity.

The former Chair of the watchdog was taken to court following a report of the Parliamentary Anticorruption Committee.

On Monday VAS concluded that there was no proof of kinship between Kushlev and the seven members of the watchdog he appointed.

A check of the Council of Ministers Chief Inspectorate conducted in the beginning of 2011 indicated that he had appointed three 6th degree relatives by marriage.

VAS also freed Kushlev of conflict of interest charges over his participation in the managing bodies of two nongovernmental organizations despite his civil servant status.

The judges based the acquittal on the lack of personal gain, one of the two mandatory prerequisites for conflict of interest.

VAS' ruling stated that Kushlev had violated two laws through his participation in the two NGOs but the infringements were no proof of conflict of interest.

VAS' decision can be appealed before a five-judge VAS panel within 14 days of its announcement to the parties.

The conclusions of the three VAS judges are endorsed by the representative of the Supreme Administrative Prosecutor's Office assigned to the case.

In April, Prime Minister Boyko Borisov removed Stoyan Kushlev from the post of Chair of the Commission for Establishing Property Acquired through Criminal Activity.

He was succeeded by Todor Kolarov, a lawyer, former analyst at the World Bank and legal adviser at the American Embassy in Sofia.

The official reason for his dismissal was the incompatibility of his civil servant status with his participation in the two NGOs.