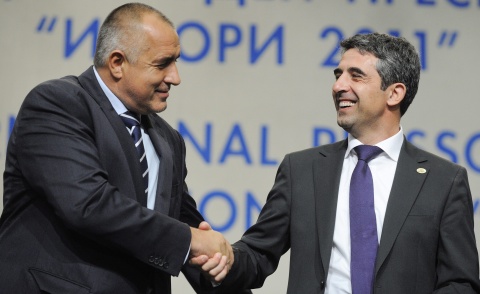 Bulgarian Prime Minister Boyko Borissov scored a sweeping victory in presidential and local elections yesterday (30 October) as voters backed his candidate for president, Rossen Plevneliev, and handed the ruling party a majority of mayors throughout the country.

Plevneliev, the GERB candidate won 52.5% of the vote to 47.4% for the Socialist Party's Ivailo Kalfin, with 98% of the election ballots counted.

In parallel local elections, GERB (Citizens for the European Development of Bulgaria) succeeded to win a majority of municipalities across the country, including the two biggest cities, Sofia and Plovdiv.

Plevneliev, 47, was the minister of Regional Development and Public Works in Borissov's government. Before Borissov nominated him as candidate for president in September, Plevneliev used to say that he is not a politician. A rich businessman and owner of one of the first private building companies in Bulgaria, officially Plevneliev is not affiliated with GERB.

During the campaign, Plevneliev carefully avoided holding debates with other candidates and repeated generalities in public appearances. His detractors say he lacks ideas about the post of president and that he would be Borissov's puppet.

Seeking support outside the traditional Socialist electorate, Kalfin, also 47, an MEP and a former foreign minister, stressed during his campaign that Bulgarians should not give all the power to GERB, a party that he accuses of having authoritarian tendencies.

Ahmed Dogan, leader of the Movement for Rights and Freedoms (MRF), a party of the country's Turkish minority, said his electorate would back Kalfin. However, preliminary results in the regions populated by MRF supporters show that his instructions failed to produce a landslide for the Socialist candidate.

Meglena Kuneva, a former European Commissioner who was third in the first round of elections on 23 October, didn't provide any indication to her electorate for whom to vote. According to one analyst, her votes were equally split between Plevneliev and Kalfin.

At a late-night press conference following the announcement of the preliminary results, Socialist leader Sergei Stanishev refused to congratulate the victor. He said the elections had been an "unprecedented manipulation of public opinion" and that "unprecedented pressure" had been put on voters to support the GERB candidate.

"What took place should not be forgotten and should not remain without a reaction, otherwise it would be a crime for the country's future," Stanishev said.

He said GERB had achieved its goal with" massive vote buying, with threats, pressure, including beating".

Many reports from across the country indeed speak of vote buying and irregularities, including a rather high percentage of invalid ballots. According to some political scientists, an estimated 15% of the country's voters, who live in poverty and in the margins of society, are willing to sell their vote.

Kalfin said massive electoral fraud and vote-buying would make it even more difficult for the country to win the EU's confidence to join the Schengen area.

However, another Socialist official, Mladen Chervenyakov, said there was not enough proof to substantiate the allegations of fraud before a court.

According to Stanishev, the Socialist Party had achieved its goal by winning support outside its traditional electorate and by spearheading the fight for democracy in the country.

Borissov rejected this statement with irony, saying that the Socialists, who are the political heirs of the former communists, could not possibly be a pillar of democracy.

Asked if GERB was suffering from "indigestion of power" by holding the posts of prime minister, speaker of the Parliament and president, he said that in the early 1990s the anti-communist Union of Democratic Forces has held all the important positions in the country, and that later the Socialists had also held the same posts.

Regarding Stanishev's comments on vote manipulation and instigation of fear over the electorate, he said that he swore that he hadn't given "one lev", the country's currency equal to about 50 euro cents, on vote-buying.

"We did the cheapest campaign in the country. And those billboards across the country, they should be now kind enough to clean them up," he said, referring to political advertising from his opponents.