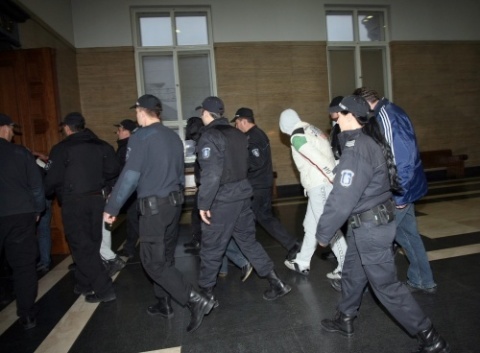 The trial against some of the alleged "Impudent" gang members, seen here escorted by the police, will go on in November. Photo by BGNES

The reason for the withdrawal, announced during the session of the Sofia City Court, is the fact Kirilov exceeded his authority by making an inspection of the house of a witness, Ivan Velev, without notifying the magistrates.

The high-profile criminal case followed a special police operation entitled "The Impudent", cracking down on the alleged gang which has terrorized Bulgaria by kidnapping important businessmen and/or their relatives. The operation was carried out in Sofia and in the cities of Veliko Tarnovo and Montana.

Among the 9 accused in the trial, Ivaylo Evtimov and Prokopi Prokopiev are charged with racket and with organizing a kidnap gang. Daniel Dimitrov, Lyubomir Dimitrov, brothers Radoslav and Mitko Lebeshevski, Pavel Petkov, Kiril Kirilov, and Tsvetozar Slavchev, are all charged as accomplices in a total of 11 high-profile abductions over the last years.

Velev owns a house in the village of Petrovene, where kidnapped college student, Rumen Guninski, was, allegedly, held. Guninski had also been part of the Prosecutor's inspection, which had turned the planned reenactment inside the house void. When there is a trial, the prosecution is a side in the case and collecting evidence is within the authority of the magistrates.

Defense lawyer, Iliyan Vassilev, asked for the removal of the second prosecutor in the case, but the request was rejected by the Court.

The next session was scheduled for November 21.