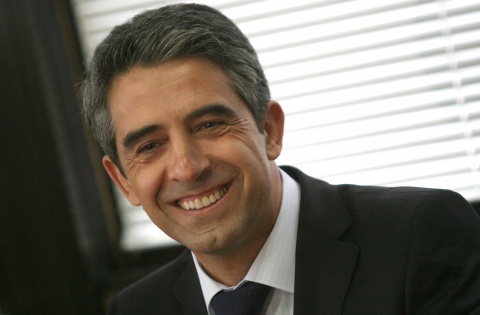 Interview of Novinite.com (Sofia News Agency) with Rosen Plevneliev, who is the President-Elect of the Republic of Bulgaria.

Plevneliev beat his Socialist competitor Ivaylo Kalfin in the run-off by receiving 55.3% of the votes, vs. 44.7% for Kalfin.

Rosen Plevneliev served as Bulgaria's Regional Development Minister in the Borisov Cabinet in 2009-2011, quitting in order to run for President. Before joining the government he was a renowned construction entrepreneur with background on large-scale projects in Germany and Bulgaria.

*This interview was originally published by Novinite.com (Sofia News Agency) and Novinite.bg on October 20, 2011.

Why did a technocrat like yourself decide to bid for probably the "most political" office in the state, which, even though it is technically non-partisan, requires a very good mastering of political "games" to put it that way?

I don't think that politics and the technocratic approach are incompatible. The results are always important because there is no policy for itself. Those who dedicate their lives to the "laboratory" exploration of politics probably think that a politician cannot be a technocrat but my understanding is a lot more pragmatic.

Politics is about finding solutions and managing processes so that you can have specific results. A good politician makes people's life better, that's the only point in their work. I think that this is the kind of President that Bulgaria needs.

You held a top government post as Regional Development Minister, and worked as a construction entrepreneur before that. Which do you think were your greatest achievements in these two capacities?

In the past two years, my team and I worked in a way that probably for the first time in 20 years made the activities of the Ministry of Regional Development and Public Works visible for everybody. I don't really need to enumerate all the successful projects.

I am proud that we managed to turn Bulgarian infrastructure projects into EU priorities. This means not just funding from the EU, and saving money from the state budget that can be used for something else.

That is how I understand politics – when in a time of extreme economic crisis you manage to absorb 40 times more EU funds than before, and thus multiply their effect into all other spheres.

Trust is key in this process of work because you know that the EU grants this funding when it is certain that you will not embezzle it. This trust, in turn, in national capital, it is very hard to achieve it but it is fully worth it.

You can view the effect of my work as entrepreneur as well. I realized two of the most significant investment projects in Bulgaria in the recent years which have specific results – 10 000 jobs, infrastructure investments – the Sofia beltway, the Sofia Metro – everything is right there, and it has unconditionally benefited the people and the state.

What have been the strengths and weaknesses of the two-year rule of the government of Boyko Borisov?

The voters are the ones who should give their assessment about the strengths and weaknesses of the government. But I would still like to stress the most obvious things.

In the past two years, the Borisov government managed to cope with the most difficult thing – in spite of the economic crisis that engulfed the globe, we managed to preserve Bulgaria's financial stability without raising taxes, and reducing the social payments.

I think that this is an indisputable success for an any objective observer when we compare it with the situation of our neighbor and elsewhere in Europe.

The other tangible success is restoring Bulgaria's good name in Europe and changing the others' attitudes towards us.

There are still things to be done in healthcare reform but the most important thing is that the reform has finally been started after nobody dared to do that for many years.

What will your relations be with Borisov and his Cabinet if you get elected President? For example, under what conditions would you veto a law sponsored by the GERB party and the Canibet?

I've made that clear more than once that I will work solely in the interest of the people, and I will be doing that with any government that works in the same direction. These are the conditions that I will use in order to decide whether to veto a law or not.

I will not be using the veto as a partisan tool or in order to hinder somebody's work but as an additional opportunity in the legislation process to hear additional arguments and to re-assess the public interest.

If seems that the Bulgarian nation has been lacking a true national ideal for the past 20 years, and probably for an even longer period of time. What do you think Bulgaria's "national ideal" should be?

I think that Bulgaria's "national ideal" is clear: to establish a modern European state in which we all can live better. As a whole, this is the result that the Bulgarian society expects from us.

This means that we need to imagine the way we wish every single sector – economy, education, healthcare, agriculture – to look in 10 or 20 years. We should formulate goals, find the long-term solutions, and work to achieve them, rather than starting from scratch every four years.

Leaving aside the fact that the Bulgarian President has no direct functions regarding economic policy, what is your recipe for Bulgaria's economic development? For example, which sectors should be prioritized?

Generally, we need investments in sectors with high added value; they are resistant to crisis, bring good revenues, and not just create but also guarantee jobs.

The economic crisis put forward the structural weaknesses of the Bulgarian economy – low productivity, high energy consumption, unfavorable business environment. A high amount of FDI was directed in the previous years in sectors such as construction, real estate, and financial services, rather than manufacturing sectors.

Bulgaria needs growth based on innovations and new quality. But when drafting such a strategy, we need long-term goals. It is no accident that the EU is already working on a strategy until 2030.

Energy efficiency should also become a priority. This is the topic of the future because now about 50% of the energy is wasted during its transit. We need to decide what is more important in this situation – to keep compensating for these losses with new production capacities, or to focus on a massive investment in energy efficiency with smart grids and hi-tech solutions.

The President represents Bulgaria in international relations and is the Commander-in-Chief. What should Bulgaria's international strategy be with respect to its national security and diplomatic relations?

The foreign policy activities of the Bulgarian President should be extremely pragmatic. They need to create added value for the realization of national priorities. Through such international activities, the President can attract investments and provide support for Bulgarian business operations abroad.

This is how we will make our foreign policy understandable – by demonstrating its results, and focusing it on the economic interest of the Bulgarians. We need to create a contemporary diplomatic service with clear-cut goals, and with accountability for the results of its work. This is what I am going to do as President.

As far as the armed forces are concerned, I am convinced that in the 21st century, quality is more important than quantity. All the more so because Bulgaria can use the opportunities of collective security systems as an additional resource for the development of its armed forces.

We are part of NATO, and we want the others to know that we are a solid partner that can be relied on. Current national security threats cannot be addressed when they reach the national border, we need to act to prevent them where they occur.

Bulgaria's demographic situation is worsening tremendously. It includes the question about the situation of the Roma, among other things. It threatens to hinder Bulgaria's economic growth in the future. What is your solution?

The demographic question is directly connected with the prosperity of the Bulgarian nation. We need to create a secure and "humane" environment for the development of the people, and a stable economy. This is the foundation and the most working mechanism in which to cope with the demographic crisis.

The integration of the Roma starts with education and professional training. We need to pay serious attention to the young people in this community, to provide them with ways in which to earn their living, to develop, and to become competitive.

I don't believe in the effect of one-time or individual measures – we need a stable and long-term policy about how to encourage education and professional training in these communities.

Bulgarian Prime Minister Boyko Borisov already announced that he will be running for President in 2016, thus depriving you of the chance to run for a second term in office if you win the elections in 2011. How do you accept this situation in which you seem like the "Bulgarian Medvedev? Would you agree to serve just one term if you emerge to be a very successful President?

I don't like to answer with "if". Right now I am the presidential candidate of the GERB party. I am sure that I will work as I always have – in the best possible way. All other comparisons are extremely inappropriate.

However, don't expect from me a demonstrative opposition without arguments because this is a policy that I do not accept.

Which are the three things that you are convinced you will do if elected President?

I am a person who fulfills his promises and commitments, and that is what's going to happen in the future. But, in general, I would like to turn the Presidency into a place where national priorities will be formulated, and I will insist on their carrying out before everybody else.

I will turn all policies with their face to the people, and their needs.

Finally, I will work in order to demonstrate that politics is a territory where specific results can be achieved.