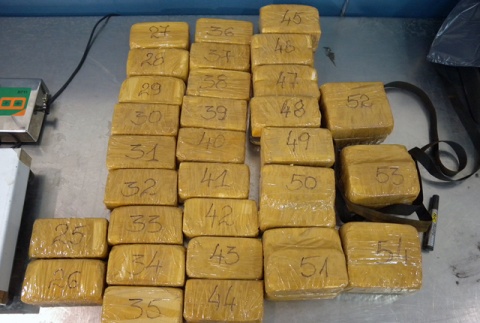 42 kg of heroin were found in 54 packages at Danube Bridge. Photo by Interior Ministry

Bulgarian anti-mafia units have captured a 42-kg shipment of heroin at the so called Danube Bridge linking Ruse in Bulgaria and Giurgiu in Romania, the Interior Ministry announced.

The narcotic was in 52 packages hidden in the fender of a BMW, which was inspected on Saturday as part of a special operation of the Unit for Combating Organized Crime GDBOP in Ruse, in coordination with the regional anti-mafia unit in Plovdiv.

The police have arrested the BMW driver, a 44-year-old man, and his 19-year-old daughter on the spot; two other men aged 52 and 30 have been arrested subsequently in connection with the same case in the southern town of Karlovo.

The Plovdiv District Prosecutor's Office is following up on the arrests and seizures with the investigation of the organized crime group in question.