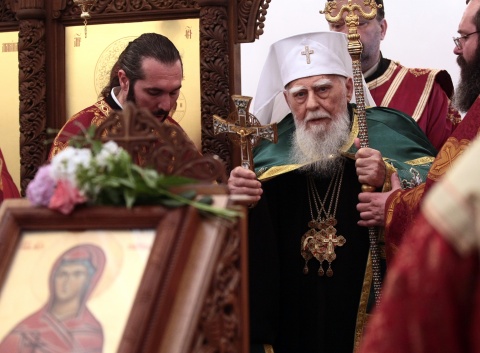 A couple of hundred Bulgarians flocked to a solemn mas in the St. Marina cathedral in Plovdiv to mark the 97th anniversary of Patriarch Maxim Saturday.

The head of the Bulgarian Orthodox Church celebrated his birthday in Plovdiv at the invitation of Plovdiv mitropolitan bishop Nikolay.

Before coming to the city, the Patriarch held a solemn service in the Bachkovo Monastery, located in the Rhodope Mountains south of Plovdiv.

Maxim was born October 29, 1914 in the village of Oreshak, near Troyan in central northern Bulgaria as Marin Naydenov Minkov.

In 1938 he enrolled as a student at the Faculty of Theology at Sofia University, and in December 1941 he enlisted as a monk at Troyan Monastery.

He was chosen Patriarch by the Holy Synod of the Bulgarian Orthodox Church on July 4, 1971.

This year marked the 40th anniversary of his enthronement as Patriarch.