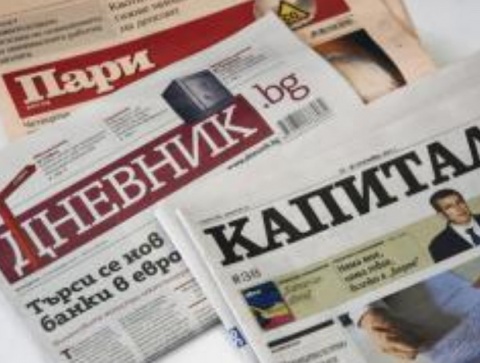 Dnevnik and Pari will be merged to form a new newspaper, Capital Daily, a publication of Economedia. Photo by Union of Bulgarian Journalists

Two the popular Bulgarian daily newspapers – mainstream paper "Dnevnik" and the economic newspaper "Pari" are to be merged into a new newspaper, Dnevnik's publisher Economedia announced.

The announcement comes a month after Economedia made a deal for the transfer of the Pari daily into its portfolio from its owner, the Swedish company Bonnier.

Thus, the print edition of Dnevnik and Pari will be merged into the new paper, "Capital Daily", which is essentially renaming the paper after Economedia's weekly "Capital".

The first issue of Capital Daily will be come out on Monday, October 31, 2011, the day after Bulgaria's presidential and local elections.

"Our strategy is to united the readership of businesspeople and decision-makers through three products under the "Capital" brand – the Capital weekly, the Capital Daily, and capital.bg, and to redirect the Dnevnik brand through its web platform dnevnik.bg towards all active Internet users," explained Economedia CEO Liliya Apostolova.

The mission of the Capital Daily will be to provide quality business content directed at decision-makers, Economedia said, adding that the print edition of the newspaper will be published "every working day, on 24 pages, pink paper, and with a modern design."

Capital Daily's content will be uploaded at capital.bg; the print layout will be available in a pdf format for only for paid subscribers of Capital Daily and capital.bg. The existing subscribers of Dnevnik and Pari will keep their subscription, said Economedia, which is one of the major players on the Bulgarian newspaper market.