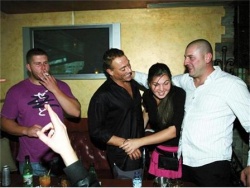 Jean-Claude Van Damme (2nd from the left) hugs a waitress and the Bulgarian man who reportedly won his watch in an arm wrestling bet. Photo by 24 Chasa

Jean-Claude Van Damme has lost his watch in an arm wresting bet in Lyulin, one of Bulgarian capital Sofia's more dangerous districts, a local paper has reported.

In the early hours of Wednesday, Van Damme, together with several Bulgarians, rushed into a bar in Lyulin, witnesses have told the 24 Chasa daily.

There have been conflicting witness accounts about Van Damme's condition, raging from "well-behaved" to "completely wasted". According to the paper, the actor has been seen braking plates out of "drunken rage" early on Wednesday.

He also lost his watch in an arm wrestling bet, locals have said.

Van Damme is in Bulgaria for the shooting of "The Expendables 2", an action movie that also stars Sylvester Stallone, Bruce Willis, Jason Statham, Chuck Norris, Arnold Schwarzenegger and Dolph Lundgren, among others.

The Belgian actor is well acquainted with the Balkan country, as he has already taken part in several movies there.